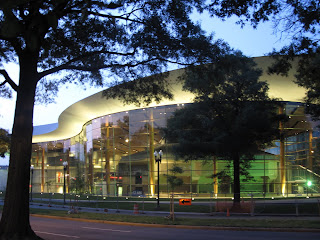 Arena Stage announced in a press release today that they have selected José Andrés Catering with Ridgewells to operate the theater's café once it opens this fall. Menus and operating hours will be announced at another time. From the press release:

“I have been a longtime fan of José’s restaurants, and am just plain thrilled that José Andrés Catering with Ridgewells will be creating food in our beautiful new cafe space,” shares [Arena Stage Artistic Director Molly] Smith. “Along with other exclusive catering partners, Arena Stage will now not only be a home for American theater in Southwest, D.C. but of the culinary arts as well. The synchronicity between great art and great food is undeniable.”
“Many years ago when Molly told me of her dreams for the new Arena Stage, I knew I wanted to be a part of it,” adds Andrés. “And now, my team and our partners at Ridgewells are here at Washington’s most amazing new destination.”

Andres owns/operates several restaurants in the metro area through his ThinkFoodGroup company, including Jaleo, Café Atlantico, and Zaytinya. According to the Washington Business Journal, José Andrés Catering with Ridgewells was formed last year.
In addition, Design Cuisine, Fresh Start Catering, José Andrés Catering with Ridgewells and Salamander Hospitality were named the four exclusive caterers for the theater. Haute cuisine indeed!
Posted by SWill at 9:26 PM

Very exciting. Thanks for the update. The landscaping around Arena Stage is coming right along and can't wait for the fences to come down.

The lighting treatment from the inside and along the perimeter looks great too!

They are paving 6th Street this morning!!! PINCH ME.

Will the cafe be open to the public, or only for theatregoers?

Great news about the new CVS on the twitter feed too, SWill!

It would be pretty great if it were open on non-performance evenings or during them - it looks like it'd be a terrific spot to meet a friend for a glass of wine in the evening and I can see it really becoming a community and cultural hub.

Jennifer: They haven't decided what the hours of operation will be yet, so there's no indication whether it will be open to the public.

FINALLY! The first exciting food news for Southwest!! This sure beats hearing about the expanding mediocrity of Subway and Pizza Autentica. I sure hope it's open to the public and not just theatre goers. I enjoy going to shows at Arena Stage, but I suspect I'd be happy to eat at their Cafe on lots of occasions beyond when I'm attending the theatre! Arena Stage, are you listening?