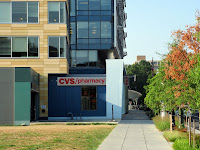 The new 12,513 SF CVS at Waterfront Station opened for the first time today. This follows the opening of Safeway in April, so both anchors of Waterfront Station are now up and running. From now on, CVS will be open seven days a week from 7am to 10pm. I stopped by around 8am to see what the store looked like and snapped some photos. There weren't many people around while I was there, but then again, it was pretty early in the morning on a Sunday. They were giving out free samples of cookies and $2 off coupons (with a $10 purchase). Below are some exterior and interior photos of the new store. 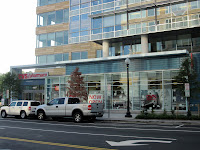 (Left) There is a mural of the Capitol Building along the glass display area outside of the store. 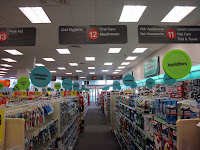 (Right) Here is a look down one of the aisles. Throughout the store, there are kiosks where customers can scan their ExtraCare Card to see if there are any coupons available. 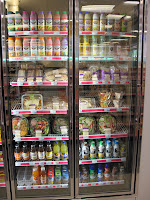 (Left) There is an expanded grocery section in this CVS. In addition to bread and frozen foods, customers can pick up a salad or a sandwich. Apparently, this store is one of the many stores that added this feature in 2010. 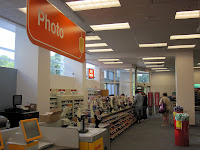 (Right) This is the front checkout area. There are no self-checkout lanes like there are at some other CVS stores in the city, but there are six registers in front, as well as ones at the pharmacy.
Posted by SWill at 6:57 PM

why don't they just set-up shop in the basement instead of covering up their windows? stupid cvs. engage the street you fools.

The interior of a CVS is not exactly a sexy or "engaging" view, and I don't think there is any reason to subject passersby to that...

Or perhaps they could make it engaging. I passed by there Sunday evening and had absolutely no idea they were open - why would I, the windows are covered just as they were during construction.

Check out what even CVS can do to make our new block just a little better:

Geeeeesh. Such whiners. Why don't you ask CVS to move back into that lovely trailer and enjoy the view from there.

Any reason for no self check out lanes?

I love the stainless steel signs that now hang in front of CVS and across the street. Lets hope Subway goes with modern look and not too much of the tacky yellow and green.

Now that things are coming together, I hope any new buildings in the future that go on the property would include more ground level retail.

CVS blocks all of their windows like this, or just bricks them over. Some are used for changing art displays.

I am going to propose to the SWNA that their historical memorabilia collection be used as the basis for a semi-permanent display in these windows instead of the Capital images. Done properly, it could be a great local history lesson that would also provide a point of interest to visitors, just as the walking routes do now.

The CVS on P Street NW betwen 14th and 15th just put in self-service registers, so ours not having them is an obvious business decision. Can you blame them?