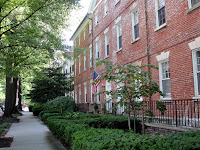 There were a couple posts this week on Greater Greater Washington where the author compiled a list of his 20 least favorite streets in DC. Streets in Southwest that made the list include: Water Street (#19), 4th Street (#13), Delaware Avenue (#6), and Chappie James Boulevard at Bolling Air Force Base (#3). I agree with the author that Water Street serves as a redundant street that runs parallel to Maine Avenue and he suggests the street should be removed & replaced with buildings fronting Maine Avenue. Well...that's exactly what's going to happen as a part of the redevelopment of the Southwest Waterfront. Phase I, from 7th Street to 9th Street, is supposed to get underway by 2013. As far as 4th Street is concerned, I don't know why this street was on the list (and ranked higher than Water Street?). Most of 4th Street in the residential portion of Southwest has a great tree canopy and with the recent reopening of the street at Waterfront Station, it will have a more active street scape. Plus, 4th Street has bike lanes (the street north of I Street will get lane markings later this year). Delaware Avenue only runs for a few blocks in Southwest and dead-ends at a circle on H Street. Lansburg Park runs along Delaware, which needs some TLC. I've never been inside Bolling Air Force Base, so I can't comment on Chappie James Boulevard. Do you agree with his choices?
Above is a photo of Wheat Row on 4th Street, the oldest surviving row homes in DC.
Posted by SWill at 11:15 AM

I agree with your take on this. 4th Street doesn't deserve such cruel treatment, as it's a perfectly charming street in most places (though seemingly under permanent reconstruction nowadays at others). Water Street does seem a bit odd, though Maine Ave. acts more like a highway in that section that I always assumed that Water was necessary for local business. Delaware has been in a bit of a sad state for quite some time. I've heard tell that it was once the grand avenue of SW long before the urban planning missteps of the mid-century, making its current state that much more regrettable. I think they should turn that whole cul-de-sac northern end into a park, as it doesn't quite go anywhere anyway. They could just extend G Street to give access as needed and make the rest a green space.

(And I don't know anything about the AFB.)

Maybe they haven't been to SW in awhile and didn't know 4th St goes through now with the new buildings, Safeway etc. I could see 4th St on the list pre-construction.

My take is that Fourth St. - south of the M St. - demonstrates a lack of planning on the part of the DC government with respect to traffic enforcement and providing for a linked network of bike lanes.

By way of background, Fourth St. was once a fairly peaceful thoroughfare for Southwest residents and those working at a relatively "sleepy" Ft. McNair. Morning and afternoon weekday rush hours were brief. Today this stretch of Fourth St. has morphed into a major car, truck, and shuttle bus route that mostly connects thousands of suburban commuters to an expanded Ft. McNair, a new facility for the Dept. of Homeland Security, as well as the Coast Guard HQ's at Buzzards Point.

Rarely do these vehicles obey the 25 MPH speed limit or give cyclists/pedestrians the right of way. Unlike the newly opened portion of Fourth St. there are no bicycle lanes south of M St.

In short, due to a lack of traffic enforcement and government planning, Fourth St. - south of M St. - has dramatically reduced the quality of life for the residents in our near Southwest neighborhood.

I could not completely agree w/ the Water Street selection. I know it is redundant, BUT it is a very nice and safer alternative for cyclists. Have you ever tried to ride your bike down Maine Avenue? It's scary.

In line with gersemalina, Water Street provides a much safer route for cyclists getting over to points west, without harassing pedestrians on the sidewalk (which DC has foolishly marked as a bike route), and without risking one's life trying to bike on Maine Ave. As someone who commutes by bike to the L'Enfant Promenade, and who trains several times a week over at Hains Point in the morning, having Water Street as a safe harbor to cycle on has been invaluble to living in SW. I hope when they start finalizing the plans for the waterfront redevelopment that they provide for safe cycling across that area of town so we're not at risk of getting run over by cars, and we're not putting pedestrians at risk of getting hit by reckless cyclists.

Additionally, Water Street also provides for two more lanes of much needed time-limited parking which would not be available on Maine Avenue.

Well, this should be taken with a grain...nay...a shaker of salt. Let's remember who's making these rankings - it's just a random dude on a blog (no offense to SWill). The guy is by no means an authority. From the sound of the comments on GGW, it sure looks like he's got a fair number of detractors there, too, which pretty much agree that he's a judgmental prick.


Seriously - how can 4th street be on the list, but the Whitehurst Freeway isn't? Makes no sense.

You read that blog? How do you not fall asleep on your keyboard? I wouldn't put too much faith into what they post. This list was probably derrived from randomly Googled old street views.