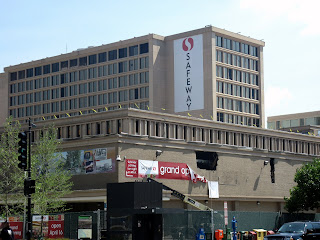 I noticed yesterday that demolition has begun on the old Safeway at Waterfront Station on the back side of the building. Chairs have been added to the tables installed in front of the new Safeway, which are always in use whenever I walk by the store. Two large urns with plants have been placed at both entrances to the access road that crosses 4th Street between the Safeway and the Metro entrance. In addition, workers have removed the window coverings inside the new CVS, so passersby can now see the build-out underway inside, which should be complete this summer. The Washington Business Journal reported last week that CVS expects to expand grocery aisles in about 43% of their stores in 2010, so our new 12,543 square foot store will most likely have more food options than the trailer/older store at the old Waterside Mall. Over the weekend, I also noticed some graffiti on the 1100 4th Street building. I haven’t walked along 4th Street since Saturday, so I don’t know if the graffiti has been removed yet. It’s been a busy couple of weeks for me, but I’ll have some updated photos of Waterfront Station and other neighborhood projects soon. 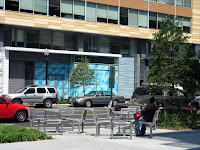 (Left) Chairs have been added to the tables set outside of Safeway. 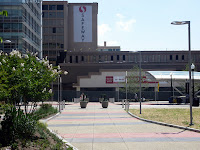 (Right) Urns have beeen placed on the entryways to the access roads that have been built between the buildings at Waterfront Staion. This is a view looking east towardsd the Metro plaza. 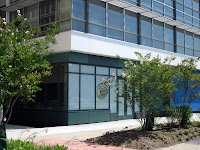 yes, graffiti. It was only a matter of time. Ever walked by the lovely park benches surrounding 4th Street? Typically they're littered with junk food wrappings and recently an empty two liter bottle of pink zinfandel and plastic Starbucks cups. Lovely. Where do DC City workers put their cigarette butts? You guessed it, on the the sidewalk, in the tree boxes, flicked into the street.

I think work has also started in the Waterfront Cleaners storefront across from the new CVS. The duck pond is also full of litter after the DC workers have lunch there, partly because the bins don't have lids and aren't emptied as regularly as they should be. It's a shame with the park so nicely cleaned up this year. Squirrels are in and out of the bins all day, can rats be far behind?

This is why we can't have nice things.

Re. the graffiti, what a shame! This unfortunately confirms my suspicions that the neighborhood has a long way to go ...

It looks like the graffiti was written using ketchup, so it has been removed from the building.