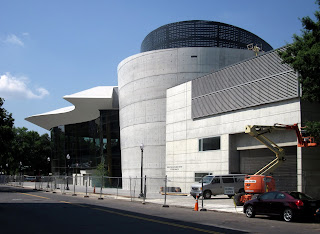 According to The Washington Post, Arena Stage has hired five playwrights as they gear up for the reopening of the complex this fall. From the article:

Over the next three years, five playwrights will be part of Arena's American Voices New Play Institute, which was formed in August and financed by a $1.1 million gift from the Andrew W. Mellon Foundation. The writers will be paid to write on any project they please during their three-year tenure, with the promise of a stage production and an additional pot of development money under their control.

Over the summer, the theater's staff will be moving into their new home so they will be ready to officially open the new theater complex by October 24th. At the top of this post is a view of the 6th Street frontage. Washington Globe street lights have been installed, similar to the ones that have appeared at Waterfront Station and Constitution Center. In addition, trees have been planted along 6th Street. Below are a few more photos of the progress made at Arena Stage. 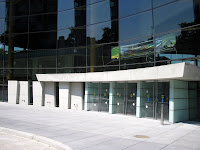 (Left) Here is the main entrance to the theater on 6th Street. 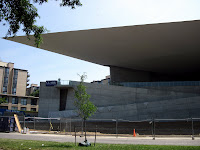 (Right) The point on the cantilevered roof points towards the Washington Monument in the distance. 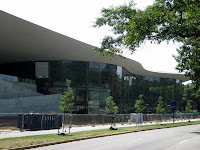 (Left) This a a view of the theater's frontage along Maine Avenue.
Posted by SWill at 11:28 PM

This is FANTASTIC news! Arena Stage is going to be the true catalyst for the renewal of SW. I believe it already rivals Actors Theatre of Lousiville of the most original productions that ended up on Broadway of any regional theatre in the country. Just wait until these playwrights get busy! Unlike the Ball Park, Arena Stage will bring in hundreds sophisticated, affluent vistors from all over the District and region, virtually every night of the year. Good times ahead!

"(Right) The point on the cantilevered roof points towards the Washington Monument in the distance."
__________
If true, that is very bad shuing fu, or whatever that Chinese thing is called.

What's up with all that exposed concrete? It looks ridiculous next to all the glass. The view on 6th St (as shown in your first picture) looks like half the building is a prison.