Ward 6 Council member Tommy Wells will start his re-election campaign this weekend with a Southwest Campaign Kick-Off Cookout at Waterfront Station on Sunday from 1pm - 3pm. There will be hot dogs, hamburgers, and entertainment for the family.
Speaking of Waterfront Station, more street furniture has been installed recently - four tables were placed in front of Safeway a couple weeks ago and at least one of them already has graffiti on it. Also, several benches were installed in the Metro plaza last week (photos to come). Straw has been put down on both vacant parcels to the north of the office buildings (ANC 6D unanimously passed a resolution last week to urge the DC government and the developers of Waterfront Station to allow community uses on those parcels).
Update: Below are some updated photos of Waterfront Station. 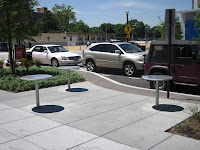 Here are three of the four tables installed in front of Safeway. 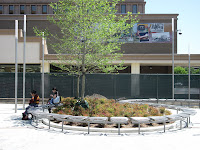 Benches have been installed around several of the trees planted in the Metro plaza. 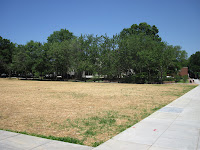 Straw has been placed in the northwest parcel owned by Waterfront Associates, eventually slated for either a residential tower or an office building. 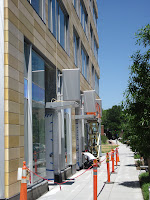 Marquee signage is being installed in three retail spots under construction at 1101 4th Street.

Does anyone know why there were a bunch of cop cars right next to the metro last night at about 11pm?

Sad to hear the new outdoor furniture is already being defaced. As someone wise once said, "it's a dirty bird that sh!ts in it's own nest."

As was posted recently on a neighborhood blog - "If you choose to live in the jungle, don't complain about the animals."