Should an Iconic Ferry Terminal be Built on the Southwest Waterfront? 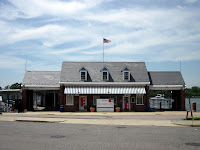 With news of a water taxi company beginning operations on the Southwest Waterfront, the question comes to mind how we as a city and region should treat water transit? In recent years, the idea of having water taxi service along the Potomac and Anacostia Rivers has been studied and regular service is now available between Alexandria and National Harbor. If more stops are added and different water taxi companies begin offering reliable service at affordable prices, could water taxi commuting catch on in DC? American River Transit is a new company that will offer water taxi service to the Southwest Waterfront, Georgetown, Diamond Teague Park, and Alexandria, with future stops at Poplar Point and 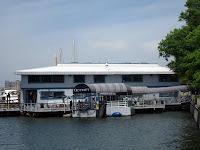 National Airport. They will join Potomac Riverboat Company as those who will have regular ferry service in the region. If water taxis do catch on in DC like they have in other cities, then the most logical place for a regional water transit hub would be the Southwest Waterfront. Can you imagine a multimodal transit facility along the Washington Channel (like Hoboken Terminal), with ferry docks, light rail station, and easy access to L’Enfant Plaza – the most connected Metro station in the system – and its revitalized 10th Street corridor? Water taxis could dock at the ferry terminal, as well as cruise ships like Spirit Cruises and the Odyssey. The current terminal for Spirit Cruises is pictured at top right and the Odyssey terminal is on the left. The new ferry terminal could become an iconic structure on the waterfront, similar to Union Station, National Airport, and Dulles Airport terminals. Heck, memorialize the building and name it after a former president, or connect it to a National Naval Museum.
Construction of a new ferry terminal building could coincide with the redevelopment of the Southwest Waterfront, which should get underway by 2012. There’s a longer-term plan by the National Capital Planning Commission to redesign East Potomac Park and build a canal through there, which would improve boat access to the Southwest Waterfront from the Potomac River. Is a new, iconic ferry terminal building as a part of the redevelopment of the Southwest Waterfront a worthy endeavor? Vote in May’s poll at the top left corner of the blog and/or feel free to make a comment.
Posted by SWill at 1:34 PM

i think this is a brilliant thought! can't believe i haven't read about this anywhere else, honestly, even as a pie-in-the-sky idea.

Really great idea-- especially if a strong connection can be made with L'Enfant Plaza metro.

As a transplant from the San Francisco Bay Area, I would love to see something like the newly renovated Ferry Building in San Francisco. It is one of the city's best landmarks with its markets and restaurants. Its good for tourists and locals alike.

Hoboken terminal might not be the best example to use, as the ferry portion of the building is abandoned.

The ferries have been departing from a "temporary" plastic structure since 2001, with the ticket office located in a building that would not be out of place in a 3rd-world country.

NJT have been restoring the building over the past decade, although progress has been painfully slow and expensive.

The Transport Politic (http://www.thetransportpolitic.com/2010/04/09/using-the-river-for-transportation/) recently wrote about water taxis and ferries. These might be fun to ride on but fares are usually really expensive and water taxi has limited utility as a form of transportation. Additionally, water taxis not particularly energy-efficient.

As the Transport Politic article notes, as a catalyst for economic development, a water taxi terminal might have some limited value, but as a form of transportation, this mode is largely lacking. I would prefer to use limited DC transportation dollars to invest in our 37-mile streetcar network and add more bike lanes. This will result in far greater environmental improvements and economic development.

If, on the other hand, a private developer wants to build such a terminal, then I would support it.

Staten Island ferry is free. It's the only way besides driving to get from that borough to the rest of Manhattan. I think that would be a more practical example than Hoboken. The Staten Island Ferry Station doesn't have much shops though which would need to resemble something like Union or Penn Station.
I think it would be a great idea if they can do free ferrys to airports or alexandria and have a good, workable schedule. And a connection to L'Efent.