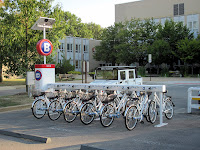 The District Government announced on Friday during Bike to Work Day (and has been widely reported in the press) that DC will be teaming up with Arlington County to create an expanded bike share program between the two jurisdictions, which will become the largest bike share program in the U.S. It is likely that the expanded bike share program, which will contain 1,100 bikes at 114 stations, will include portions of Southwest (my guess is one will be located at the Waterfront-SEU Metro station). The current bike share program in DC only has ten stations - all located in Northwest. DC's burgeoning bike lane network includes 4th Street. Bike lanes were installed on the recently reopened portion of 4th Street and will connect to the bike lanes that run on Pennsylvania Avenue, NW later this year, as WashCycle reported last week.
Above is a bike share station used by the National Park Service, located in West Potomac Park at NPS Headquarters.
Posted by SWill at 7:37 AM

I fear we are headed to disaster encourging more bikers onto the city's death-defying streets. The war between pedestrians and motorists is bad enough now, the bikers we already have are just making it worse. It's a nice program, but in a city where there is essentially no traffic enforcement other than 7 red light cameras, we are vulnerable to the bullies, whether on bikes or cars.

Anyone worried that people will TAKE the bikes? I guess loss of bikes is in their business plan ...

Yeah, all those bikse sure will look great when they're mangled underneath the front of a Metro bus. But whatevs!

Does anybody use this service? I don't think I've ever seen anyone riding one of these bikes around.

And plus, who the hell wants to risk his or her life on any vehicle with less than 4 wheels in this city?

I have seen one of the bikes downtown a few weeks ago. They are kind of clunky, old style, and ugly, the "bowling shoes of bicycles," if you will. I don't think anyone would want it bad enough to steal it. Even in DC.

That being said, I was noticing today the obvious increase in the number of people biking to work. God help them each and every one.

fear mongers. I bike to work everyday. get over it.

My dad biked to work in DC nearly every day for 20 years. For all these people who are promulgating fear of biking - you could be part of the solution by saying "I'll share the road with you too." Instead, you basically say "WTF are you doing?"

As far as being a bully on a bike, care to remind me how someone in an SUV could feel "bullied" by someone in a bike? Inconvenienced, perhaps, but could that person really feel their life threatened the way a biker would by a menacing car? Let's call a spade a spade, please.

The "bully on the bike" comment was in reference to a pedestrian in a crosswalk going with the signal who was clipped by a bicyclist coming from the perpendicular street running his red light in an attempt to go up onto the sidewalk of the cross street. It had nothing to do with an SUV.

Does anyone know if bikers are required to stop at red lights like a car? I know they are supposed to stop at stop signs. What about riding between two lanes of traffic (ideally stopped), is that legal?

I am from a Midwestern city where your bicycle had to be registered and that included a rules-of-the-road test and you could be tickted for offenses. And were.

Does our DC government have a big picture/long term plan for our Southwest community?

The suggested bike share expansion is fine but what is the city planning to do to improve the bicycle experience on M St SW? Asking cyclists 'to share the sidewalk' is unacceptable while cycling on M Street is a scary experience for most.

More over, several months ago, Councilman Wells called a town hall meeting to discuss improvements to M St. (SE and SW). There were many suggestions but, to my knowledge, no one questioned how any short term plan would fit with other planned major initiatives like rebuilding the South Capital St. Bridge/near South Capital St., connecting the National Mall to the SW waterfront through L'Enfant Plaza, and the rebuilding of the entire waterfront.

Isn't it time for Mr. Wells to prompt our city "planners" to starts connecting all the dots when it comes to the future of near Southwest community?

In my experience, Mr Wells' interest don't lie far beyond the boundaries of Capital Hill, where the vast bulk of his votes are, and that residents of SW and Penn Quarter get little more than courtesy time with him.

There is a project going about connecting the Mall to the SW Waterfront called the 10th Street Initiative. If there isn't a link on this blog's home page, you may be able to Google it.