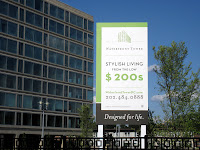 There's a story on Fox 5 News' website about the housing market and featured in the story is Waterfront Tower (I also happen to be interviewed in the story doing my day job). According to the piece, Waterfront Tower, the condo conversion project next to Waterfront Station, is approximately 60% sold. The developer mentions that many buyers are taking advantage of the first time home buyer tax credit. Also, the developer touted recent developments in the area, including the new Safeway and Arena Stage's expansion. Prices at Waterfront Station start in the $200s (as the photo on the top of the post states).
I also read in May's issue of Washingtonian magazine over the weekend that the 20024 zip code is one of the local real estate markets that is bouncing back. Prices were up last year by 12%, although prices declined by 25% over the prior two years.
Posted by SWill at 10:42 PM

I wonder how the expiration of the home buyer credit is going to affect things. Waterfront Tower has been at 50-60% sold for a few months now, and my guess is they are selling the smallest units first (but not sure). The price/sq. foot is probably the highest in the neighborhood, too. I wonder if they'll be doing a price drop on the remaining units...