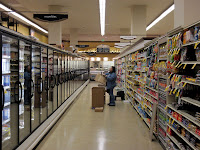 This morning I was able to get a preview tour of the new Southwest Safeway under construction at Waterfront Station. Special thanks go to Craig Muckle and Janice Stubbs from Safeway who gave me the tour. If I could describe the new store in one word it would have to be “WOW!” followed by “Am I really in Southwest?” The differences between the old store and new are like night and day. If you’ve walked by the site on 4th Street, you can get a glimpse of what’s going on inside, but there’s a lot more in store (no pun intended). At about 55,000 square feet, the new urban-lifestyle Safeway is about 20,000 square feet larger than the old store, and some of the new features aren’t even at the Mount Vernon Triangle Safeway (although the new Social Safeway in Georgetown under construction will have similar features to the SW store). 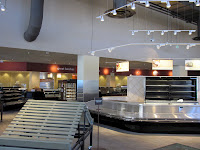 As you walk in the store from the main entrance near the Metro plaza, this area has been dubbed the “food court”, where you can pick up ready-made meals and desserts, like sandwiches, soups, salads, sushi from the sushi bar, rotisserie items, cakes, and pizza (this will be the first Safeway on the East Coast where pizza will be made on the premises btw). The layout of the store is shaped like the letter “J” flipped 90 degrees counterclockwise, so the food court is the curvy part of the “J”. 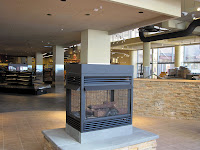 Janice said that the design of the entrance was made to feel more like an elegant restaurant than a grocery store, designed using earth tones, a stone-walled lounge area with a fireplace (another first for an East Coast Safeway), seating, and different styled flooring. Also in the food court is “Cheese World”, which will be attended and will include cheeses from (you guessed it) around the world. There will be three mini cash registers to serve the food court area, so shoppers won’t need to go into the heart of the store if they are just looking for a quick meal to take home. 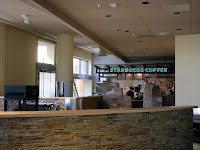 There are several seating areas in this part of the store, as well as a fenced off outdoor seating area to open next year (once the old Safeway is knocked down, which Craig says will be gone by the time the new store opens – I’ll believe it when I see it). A second entrance is located north of the main entrance, close to Starbucks, which also has seating off to the side of the counter for its patrons. 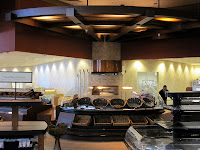 Past the food court is a hearth oven, where European breads will be baked (the old store doesn’t have a bakery). Craig guaranteed that warm bread will be available every day, even after 5pm. For those of you who are picky about how wide you want your loaves cut, a fancy bread slicer (Bizerba) uses lasers to cut the bread up to four different sizes at once right after leaving the oven without crushing the bread. 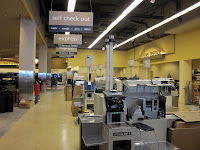 Cash registers and the customer service desk are located where the “J” bends towards the stem (still follow me?). There are seven full-serve registers and six self-check-out lanes. This area is also where the entrance to the parking garage is located, with two elevators and a staircase leading to 165 parking spaces for Safeway patrons. With an $8 minimum purchase, parking is free for up to 90 minutes. 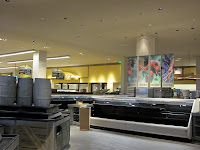 Next to the check-out lines is the produce department – its placement next to the cash registers is also a first for an East Coast Safeway store. The new store also has a pharmacy, which the other store didn’t have and is located near the produce section. We will now have two pharmacies on the same block, with CVS moving two doors down from Safeway in a couple of months. 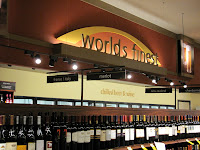 Now, the stem part of the “J” shaped store is where you’ll find your typical grocery aisles. There are two aisles in the corner dedicated to wine and beer – also not found in the old store. The larger store format will allow Safeway to provide an expanded amount of products on their shelves, including more international cuisine. 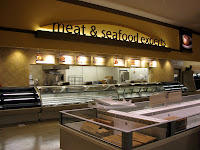 At the back of the store is the meat and seafood section, with a service counter. One interesting feature about the service counter is the butcher will marinate your meat or seafood for free using either a dry rub or liquid marinade. The shish kabobs are supposedly very good too.
While I was at the store, several Safeway employees were stocking shelves – many of the aisles looked almost fully stocked with prices already on items. The new Safeway will open for a preview party on April 15th from 4pm-8pm and all items will be 10% off. Regular hours of operation after the 15th will be 6am – 11pm 7 days a week. Countdown to new Safeway opening is 14 days!!!
Posted by SWill at 10:13 PM

wow, looks awesome! Can't wait to check it out in a couple weeks

I'll admit, my jaw hit the floor while reading this post! Can't wait!

What a treat! And I agree with your sentiment about Am I in Southwest?? My only pessimistic thought is that the employees won't be as spectacular as the brick and mortar.

Looks great! However, I hope the Safeway regional/store mgmt intends to keep its word to crack down on staff that refuses to "up their game" (in terms of service, speed, friendliness, cleanliness and general competency), as they told the community they would last Fall. Otherwise, what is the point?

Agreed... What's the point of a fancy new store if the produce is still rotten, the employees are still slow as slugs and rude as hell??

This is great and I am very excited. You provide a great service to our community.

Laser bread slicers? Great preview, I'm so stoked. The self-checkout should go a long way to solving the problem of slow cashiers I hope. SW pride.

I cannot wait. It looks absolutely amazing! This new Safeway is going to save me the trek to Harris Teeter that I usually have to make.

I haven't shopped at the SW Safeway in a while. Lines were just too long and slow. I'm still convinced the area could use another grocery store; the competition might get Safeway to "up their game."

But this certainly looks promising.

Oh, boy, look what's crawled out of the Internet woodwork.

this is amazing! beer and wine sold within walking distance? my day is made. i just hope they have a completely new staff. the current one is horrendous.

I've waited so long for this time to come!

I think I'm in love.

i am so very excited, but i agree that if the store i not kept clean and the staff is still sub-par then it could turn out to be an even bigger (about 20,00 sq ft bigger) mess than before.

I am very excited about the opening of our new Safeway! Hopefully this will improve and encourage better staffing, and in turn; encourage better customer service that was much needed for many years.

I too am excited about the store, but not excited about the staff. Also, the security that works outside of Safeway that hang out with the people hawking things out of duffle bags needs to be addressed as well. If any of that continues, I will maintain my loyalty to HT. As we all know, complaints to Safeway coorporate in the past have been ignored.

I hate to say this but this morning I saw a number of the useless checkers and security people from the old store in the new store. This is a bad omen.


Hello There. I found your using msn. This is an extremely well written article. I will be sure to bookmark it and return to read more of your useful information. Thanks for the post. I’ll certainly comeback.
https://tellthebellll.com