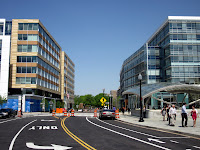 Southwest continues to get plenty of press these days, including an article in today's The Washington Post. The article is about the new Safeway and the reopening of 4th Street. A bit of news in the article states that the sit-down restaurant planned at Waterfront Station is one of the retail leases signed (although that tidbit has been taken down in the past few hours). Previously, the restaurant was just in negotiations to open at Waterfront Station. Perhaps the lease wasn't actually signed yet, so that's why it was removed from the article...
Update: The full article was put back in on Tuesday and includes some misinformation, as one commenter noted, about the Bank of America moving back into the development from their trailer. As of a few weeks ago, the developers at Waterfront Station said that Bank of America would not move back to the development and would remain in their trailer until their lease expires in December 2012. The developers are looking for another bank to take their place.
Posted by SWill at 11:20 PM

It also says that BOA is moving back from temporary quarters.... but I thought they were staying in their trailer until their lease was up?

I have a feeling the information in the article was stolen from your blog. You reported everything they wrote about days ago.

If they did steal the information from my blog, they would have known that the Bank of America wasn't coming back to Waterfront Station. :-)

an update about trash cans...I wrote to Tommy Wells (cc'ing forest city, vornado, and ANC members) and got the following response:

"Thanks for your email. I’m not sure if these were installed by Safeway, Forest City or the District. I see we’ve got the developer on this email, and I’ve added Mr. Craig Muckle from Safeway to this response.

I would assume it may take a short period of adjustment for people to get used to the new cans, but I’ll ask folks to clean the cans and remove the trash more frequently.

If the developer is looking for another bank, can local residents provide input?

Send an email to Gordon Fraley at Vornado: gfraley@vno.com

The sushi bar at the Safeway is a real giggle. The dishes and soup bowl set out are "just for decoration" I was told, there IS NO SOUP! That being said, they will make whatever you want fresh, but then THERE IS NOTHING TO DRINK. Newsflash: Green tea, black tea, or even a glass of water is sort of expected at a sit-down counter service food facility. You have to go into the store to buy a cold drink, or to Starbucks and wait in line for hot water and a tea bag if you want hot tea.

Not one to look a gift horse in the mouth, I still cheer the fact that I can go to my local supermarket and have a delicious, freshly-made sushi meal.