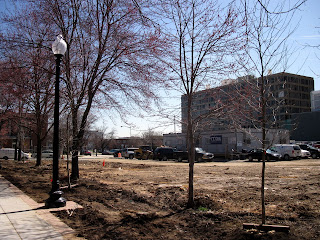 At tonight's ANC 6D meeting, four moms of young children spoke in favor of building a community playground on the northeast parcel of Waterfront Station that the District government owns. Their argument is a community playground is needed in a centrally located area of Southwest because the community doesn't have a publicly accessible playground and they have to go to Capitol Hill or other parts of the city or Northern Virginia to find one for their children to use. The women want to work with KaBOOM, a non-profit organization that helps build playgrounds and will solicit financing from the District. They will also do fundraisers to fill in any gaps in financing. In addition, Camille Cook, another local resident, expressed her desire for a community garden to be included in this proposed playground, since a garden in front of the Department of Education headquarters will be removed to make way for Eisenhower Square.
Currently, the parcel in question is vacant and is slated for a residential development once economic conditions improve (see above). I think they have a valid argument for a children's playground and garden. However, I disagree with their choice of location. At this same ANC meeting, At-Large DC Council member Phil Mendelson told the commissioners that the District is running out of money and is near its borrowing limit. The District-owned Waterfront Station parcel is too valuable to be used as a playground. Instead, the District should issue a Request for Proposals (RFP) for the Waterfront Station parcel and require a mixed-use development, including a new library. Proceeds from the RFP can then be used to knock down the old library across the street and build a playground/community garden in its place. The playground/community garden would be built later under this approach, but the community can get a new library and centrally-located playground without using taxpayer dollars. Plus, the playground/community garden would mirror Town Center Park on the other side of Waterfront Station.
Update: Vote in April's poll on what the District should do with the vacant NE parcel at Waterfront Station and/or leave a comment.
Posted by SWill at 10:45 PM

I'm all for using this dirt field for a playground and community garden. What are the alternatives... a littered and fenced off field for the next 5 or so years?

And what in the world do we need to tear down the library for? Sure, maybe it needs remodeled but I would much rather see public money spent on fixing up Amadon Elementary.

We have a littered field down the street called Lansburg Park that could be used as a playground and community garden, but right now, that green space is hardly used. IMHO, I'd prefer for the 4th Street corridor to have more retail (and yes, a new library) than a playground & garden. If a playground is built there instead, I wouldn't have a problem with that if it was just temporary, but I bet once the District decided to develop the site, people would have a fit because the city took away their green space.

Isnt there a Playground across the street from Waterfront Towers? No playfields, but then doesnt Amidon have playfields behind it? The "park" next to the library would be a nice spot for a playground. The library although older is actually a decent facility, they have lots of programs and it has a full house on the nights it is open late.

I'd love a new park /garden or playground, as long as there are benches for people to just sit as well!

Regarding the logic of "this space is too valuable" -- well, why not just et rid of most city parks then, since they're all taking up valuable real estate? Especially that pesky one near the White House ;)

I agree the library could use a renovation, relocation, or something. I would support putting a temporary playground / park there, especially if fully paid-for so as to avoid needing to leverage additional city debt.

Honestly, the newly created open space in general has given a nice feeling to 4th St -- even where it's under construction near the CFL-to-be around E.

So, yes, let's build a playground, but maybe one that could be moved (or made more permanent) in the event that a plan to house a new library there goes through (or doesn't).

If anyone can come up with a better temporary use than a playground / garden / park, please say what it is!

the space itself would be perfect for an open air market, but with others in close proximity, it may not be feasible......

I like the idea of the playground and garden, but if it is not easily relocated it would definitely be upsetting for the community if/when it was to be taken down. My recommendation is that they make it a temporary dog park until they can develop the site. They could even charge for usage like the Congressional Cemetary to tackle debt issues. IMO there are so many dogs in Southwest whose owners would pay a fee to have a place closeby where their dogs could exercise. And it really wouldn't take too much work - maybe a bag station, water fountain, and a couple of benches.

Maybe you should do a blog poll?

A play ground in that spot is a bad idea. It will become the "turf", the meeting place, for the neighborhood punks. Just want I want to walk by on my way back from Safeway/Metro.

"It's a playground, right? So of course kids are supposed to be there." No thanks.

Fix up the Landsburg park like someone else said. Or play at the Duck Pond. There's a nice play tower and slide already there.

Unfortunately, I have to agree with the earlier poster. Urban playgrounds can easily become a troubled teen hangout rather than a kids/family area, and there's just too much foot traffic passing by at all hours for it be a good idea. Plus, the money might be better spent refurbishing the smaller parks at 6th and I and 3rd and I that seem to have been neglected entirely.

For now, some decent landscaping would be fine, as long as it were maintained.

I agree with the posts above, not the right place for a playground. And, there are many other play options nearby, let's improve them.

Do any of you have children? I ask because I have two (four and two). SW is great. But, it needs improvements for families with young children. I have lived here for 12 years. But, when I had children the neighboorhood looked totally different to me. The existing options for young children are terrible in our neighborhood.

As one of the parents who spoke with the ANC, please allow me to clarify a mis-conception created by the writer of this website...

The Friends of SW Playspace Group realizes that there are other options for the city to take. Our request is for a clean, safe, centrally-located playground -- not necessarily a Waterfront Mall playground, although there was mention of it. We also are exploring Landsburg park, the "Duck Pond", and the 4th and G Street "pocket park". We want to do what is most feasible for everyone (parents, children, and the city planners), and realize that flexibility is the key to moving this project forward. Thanks to everyone on this blog who supports bringing a centrally located, clean and safe playground to the SW waterfront area! If you want to join us, please sign up at our yahoogroup: http://groups.yahoo.com/group/friendsofsouthwestplaygrounds/

Our title is "Friends of Southwest Playgroup". Thanks again.

See...no one is perfect.

I second the dog park idea. There are a ton of dog owners that would support a dog park.

Look what they did at Shaw; created a temporary dog park on the school grounds. I believe they will be tearing the park down to expand the elementary school next year, but the park has been a success so far.

A dog park is very easy to set up (fence in the area) and easy to tear down once they need the space back.

Definitely a dog park -- at least for now until they're ready to develop.

Dog park PLEASE! I also agree with the comments that at night playgrounds tend to bring bad things to a neighborhood. While I understand the need for a decent playground for SW children, I definitely do not want to create an environment that at night when I am walking home from the metro or to Safeway I would feel unsafe. Since the opening of 4th street to pedestrians, I have already seen groups of kids hanging out late at night because they have nothing else to do. As a single woman, walking my dog, it is a bit intimidating. A sad reality of our world, unfortunate really.

This is a terrible idea. The current excess of green space and parks is one of the features currently undermining safety in the Southwest neighborhood. These area are undertutilized even during the day, and at night they are under-lighted and devoid of foot traffic, creating safety hazards. We need more housing, street level retail, and people walking around in the neighborhood: the city should develop its parcel accordingly. The revenues generated from the development of the city's parcel could be used to improve and install a playground on one of the neighborhood's many other parks.

I'd love and would definitely use a dog park. But, even kid-less, I see the previous posters' points about there not being good playgrounds here in SW. I would love to see a really great playground like, say, the have out at Cabin John regional park in Bethesda, go in. A great park includes landscaping and layout design to make it all work, though, which is why I'd prefer it to not be in a temporary space, where it'd be moved, but be located at Lansburgh. There's been talk in the past of improving it for the community in the past: http://www.capitalspace.gov/six_big_ideas/Lansburgh%20Park%20SWNA%20Meeting%20Handout%20PDF.pdf

I used to live in Columbia Heights, and we had safety problems with a park by my building after dark. The solution the neighborhood came up with when remodeling the park was to build a solid fence (iron, maybe 9 feet high) around the park and lock it at night. Problem solved. It's sad that was necessary, but at least the solution worked.

Is there a place for teenagers to hang out in a supervised environment in the area? If not, adding that might help, too.

You're full of surprises, SWill. You don't give your opinions very often in your blog. I think that some blogs are for doing just that, so no criticism from me!

I agree the library needs a facelift but I'm not sure about building a whole new one. As for locating it in one of the swanky new office buildings, by Safeway and CVS, the jury is out. (The buildng has already been built, so the waste of a good building doesn't hurt as much.)