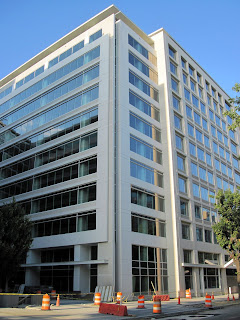 The Washington Business Journal (subscribers only) is reporting that about 800 FBI employees will be moving to 180,000 SF of space at phase II of Patriots Plaza, a 351,502 SF office building that delivered last fall on E Street. With this lease, the building is now slightly over half leased and neighboring Patriots Plaza III is mostly full, since back in November, it was announced that the USDA will move to that building. An interesting part of the article has to do with Constitution Center, which wasn't in the running for this lease from the GSA, because they have higher ambitions...from the article:

“Constitution Center has expressed strong interest in becoming the new FBI headquarters facility, with all 1,400,000 square feet being utilized by the FBI,” said Robert Hines, managing director at Cassidy Turley, who is marketing the building. While the Hoover Building’s size and design is widely shunned, it’s not clear if the FBI will ever entertain moving into a secure building in another location, freeing up the redevelopment of the existing Hoover site.

I'm sure the folks over at Penn Quarter Living would be thrilled if the FBI made the move so that prime site on Pennsylvania Avenue, NW could be redeveloped. Above is a photo of Patriots Plaza II that was taken back in September when construction was wrapping up.
Posted by SWill at 8:09 AM

the whole city should be thrilled at the prospect of getting the FBI out of that eyesore, getting rid of it, and starting that block over. they could finally bring some life to pennsylvania ave., as well as maybe re-open the closed stretch of D street through there.