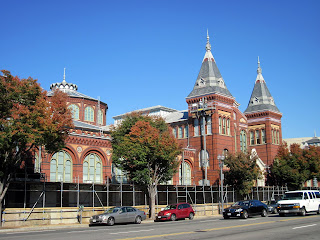 The National Capital Planning Commission (NCPC) will have their monthly meeting tomorrow afternoon and several of their agenda items are for projects located in Southwest. One of those projects is the District of Columbia War Memorial, which is located in West Potomac Park and is dedicated to District residents that fought in World War I. The National Park Service (NPS) is seeking approval for renovations. Thanks to the American Recovery and Reinvestment Act, the NPS received $7.3 million for repairs last April, but back then, the renovation was supposed to be completed by September of this year. The Commission is expected to approve final site and building plans for the memorial.
In addition, the NCPC is set to approve the replacement of the roof and window sashes at the Arts and Industries Building on the National Mall. The Arts and Industries Building is currently vacant, but these improvements, along with other restorative work that's currently underway, are necessary to maintain the 100+ year-old structure as a new use is determined for it by the Smithsonian Institution.
The DC Zoning Commission is requesting that zoning rules be changed so that development of District-funded affordable housing or as part of an approved New Community plan can achieve the maximum allowable Floor Area Ratio (FAR) and building height in a Transferable Development Rights (TDR) Receiving Zone through a special exception by the Zoning Commission. Parts of the Federal Center SW area are in the receiving zones, so higher-density development would be permitted in this part of the city under the rule change. The NCPC will most likely approve this change as well.
An agenda item that has city-wide ramifications is the CapitalSpace plan, which seeks to improve the quality of park space around the city, from pocket parks to squares & circles to the fort parks. As a part of this plan, one of the case studies in the draft plan was Lansburg Park. However, it appears that the Lansburg Park plan was omitted from the final draft.
Also on the agenda is to consider plans that were released in December by the Hirshhorn Museum to provide a 145-foot temporary inflatable structure in the museum's courtyard in May and October starting in 2011. It looks like the NCPC likes the overall concept, but has some outstanding issues that need to be addressed, including ADA accessibility and views along the Mall.
One item on the agenda that the NCPC isn't too pleased about is a plan to construct an administrative building and warehouse at the Naval Support Facility Anacostia, which is next to Bolling Air Force Base. Before the plans are approved, the NCPC wants to be sure that views to and from the new U.S. Coast Guard headquarters at St. Elizabeths aren't blocked by the planned buildings.
Posted by SWill at 7:49 PM