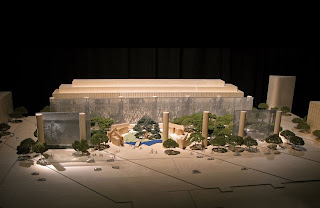 The Washington Post reports that the Dwight D. Eisenhower Memorial Commission met today to select a design concept for Eisenhower Square, the name of the memorial planned across from the National Air & Space Museum for President Eisenhower. The article gives a brief description of the selected design concept:

The commission chose the most elaborate of the designs, with a central grove and columns on the north and south sides, plus a "tapestry" of woven stainless steel mesh.

Back in January, the Commission selected Gilbane Building Company to oversee the design and construction of the memorial, which will be designed by famed LA architect Frank Gehry. The Commission will present their selection to the National Capital Planning Commission at their next meeting on April 1. Hopefully I can get a rendering of the design concept soon to include with this post.
Update: The Post has another article about the memorial that includes a rendering and gives more details about the plans. Here's an excerpt from the article:

Instead, Gehry has proposed closing off a newly defined square defined by the intersection of Independence and Maryland avenues and Fourth and Sixth streets SW. The north and south sides of "Eisenhower Square" will be [lined] by huge limestone columns, the interior filled with a grove of large oaks and a semicircular space made of a rough assemblage of monolithic stone blocks. There will also be carvings and inscriptions and a service building. But the most intriguing and potentially most problematic element of the design are three huge tapestries, made of woven metal. Preliminary models show one tapestry running along almost the full height and length of the north face of the Lyndon Baines Johnson Department of Education Building. That could limit light and affect sightlines for workers who once had views to the Mall. Gehry, who attended the commission's Capitol Hill news conference, said that the tapestry would be translucent and that it will stand 90 to 100 feet away from the Education Department building, which is essentially the width of a city street.

The memorial will close off Maryland Avenue, but sightlines to the Capitol will be maintained.
Update #2: Above is a rendering of the proposed memorial, from the Eisenhower Memorial Commission.
Update #3: DCist and Greater Greater Washington have posts about the memorial, along with more renderings.
Posted by SWill at 4:16 PM

The only thing I don't like is the gigantic Eisnehower pics. Not only is it a cop-out architecturally speaking, its plain disruptive.

this monstrosity is going to take over the space of one of the only community gardens in the area (as far as i know). we have had a spot there for years to grow vegetables. what a shame.