4th Street May Open to Pedestrians by Next Week 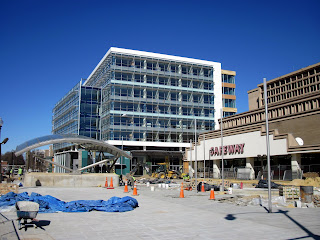 At tonight's ANC 6D's monthly business meeting, several details were revealed about what's going on at Waterfront Station. For one, 4th Street may open for pedestrians by next week, as well as vehicle access for employees of the office buildings at the development, who will start moving in their space on Friday. There are some final details that need to be taken care of before the road can open to the general public, which will most likely happen by the end of March. At that time, there will be about 900 employees working in their buildings and by the end of April or early May, there will be about 1,500 employees. Work is well underway on the Metro plaza, which will be over 30,000 square feet and will have benches, trees, fountains, and lighting. Above is a photo of the Metro plaza under construction. 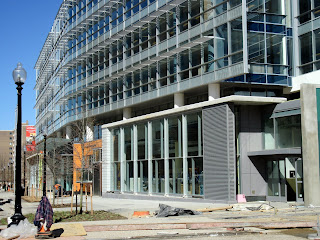 The old Safeway will close on April 6th and the new 55,000 square foot store will open on April 16th. From March 23rd until April 6th, all items in the old store will be 30% off. On April 15th - a day before the grand opening, there will be a preview party at the new Safeway from 4-8pm. Parking will be validated at the new Safeway for 90 minutes in the parking garage beneath the store with a minimum purchase of $8 (note the Mount Vernon Triangle store has a minimum purchase of only $5). A new store manager has been brought in and 22 out of 45 employees that have been hired so far live in the 20024 ZIP code. Once the old Safeway is closed, the year-long demolition process will begin. Above is a photo of the facade of the new Safeway along 4th Street, along with a construction worker's jacket. 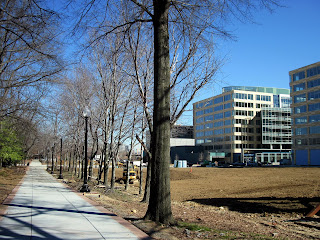 Other tenants at phase one of Waterfront Station include CVS, which will open a 12,500 square foot store on the northern corner of the East Tower in late May or early June. A sandwich shop signed a lease today (my guess is it's a Subway), a burger place is close to signing a lease, as well as a 4,000 square foot sit-down restaurant and a dry cleaners. These retailers will be located in the West Tower (the restaurant will locate in a prime spot on the south side of the building with plenty of outdoor space) and should open by late summer or early fall. Bank of America will not be moving to Waterfront Station and will vacate their trailer when their lease expires in December 2012, if not sooner, if they find another location in the area before that time. Waterfront Associates is looking for another bank to take Bank of America's place in the development. The parcels that will be a part of phase two of development will be graded and grassed over until financing is available to build. Above is a photo of the northwest portion of the site where a residential building is planned in a future phase of development.
Posted by SWill at 9:28 PM

Thanks for the report-- hard to believe it's finally going to open. With news of the sandwich shop, burger place, and sit-down restaurant, how many more retail spots are there? Is it close to being 100% full or can we hold out hope that some more businesses will be moving to Waterfront Station?

Please, SWDC gods, deliver unto us a restraunt that serves brunch at the Waterfront station.

Well, on the one hand, I'm thrilled to hear we will soon have some new restaurants in SW; on the other hand, I'll be disappointed with a Subway and some sort of equally bad burger place. Don't get me wrong - fast food options that are cheap and convenient can be a good thing ... when their food is of decent quality. I'd love to see a Chipotle, Baja Fresh, Quizno's, Five Guys, etc. I hope we're not stuck with Subway and McDonald's. I'll also hold out hope that the new sit-down restaurant strives to provide decent food and service and doesn't rely on the fact that they'll have very little competition (at least initially).

Anonymous #1: There are a total of 10 retail establishments that will open in phase one of Waterfront Station (including Safeway), so there are about three slots left by my count.

Anonymous #2: I've heard rumors about which burger place the development team is negotiating with, and it's not McDonalds...it's more in the league of Five Guys (but not Five Guys). I'm not going to say which franchise yet, since I haven't received confirmation.

This area is so under-served that I think (and hope) that SWers support the local businesses. For those of us with cars, it is so easy just to cross the bridge into VA and take advantage of Target, Wal-Mart, etc. I hope we all do our share to support the amenities.

That said, I'm hoping for a quality burger place like Fatburger, In N Out, or even a Z-burger!

As for sandwich shops--I guess Subway is OK (grumble) but I'm hoping for nice like Lenny's or a Schlotzky's (sic)...

FYI, everybody, now in addition to Starbucks and Potbelly being open on Saturday near Federal Center SW, Cafe 59 (on 3rd between D & E) is open 7am-2:30pm as well. They have a breakfast buffet in the mornings, sandwiches and a hot bar in the afternoon, as well as places to sit, so it could be a nice addition to the neighborhood options.