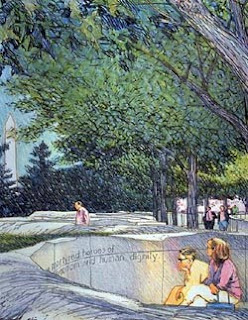 In today's Washington Post, there's an article describing the process of how the MLK Memorial will be erected along the Tidal Basin. As early as March or April, the granite components of the memorial will be shipped on barges from China to Baltimore, then transported to Washington, where it will be assembled with cranes and be ready for the grand opening by the summer of 2011. Interior Secretary Ken Salazar issued a construction permit in October 2009 and site work began in late December. Below is a description of the memorial, from the Post article:

The King memorial, located not far from the Lincoln Memorial where King delivered his "I Have a Dream" speech in 1963, is to be built on a crescent-shaped, four-acre site amid the city's famed cherry trees. The three main elements resemble a simulated stone mountain from which the center has been carved out and placed by itself in the foreground. The centerpiece -- named the Stone of Hope for a line from the 1963 speech -- is 30 feet 8 inches tall and bears the image of King in a business suit with his arms folded...The two background pieces -- together called the Mountain of Despair from the same line in the speech -- are of similar size and frame a walkway through which visitors may pass to get to the King sculpture.

Included in the article is a graphic showing how large the King sculpture will be compared to other statues in DC. The Stone of Hope will be about ten feet taller than the statue of Thomas Jefferson at the Jefferson Memorial, Abraham Lincoln at the Lincoln Memorial, and the Statue of Freedom atop the Capitol dome. The memorial was designed by Roma Design Group of San Francisco and the sculpture designed by Chinese sculptor Lei Yixin. Above is a rendering of a portion of the memorial, from the MLK Memorial website.
Posted by SWill at 9:48 PM

I'm not usually a protectionist when it comes to trade, but I find it completely disheartening when a foreigner, using foreign materials, is commissioned to make a memorial that is so culturally "personal."

Sadder still is that many of the ideals that MLK eloquently expressed would likely not be able to be shared so openly in China...