Despite an economic downturn, several events occurred in The Little Quadrant That Could in 2009...some were major projects that have been ongoing for years, while other events had their start in 2009. Below is a list of what I think were the top stories in Southwest during the past year (in no particular order). Feel free to comment on which of these events you think is the top local story of the year, and/or vote in January's poll at the top left corner of the blog.
Arena Stage Looms Large 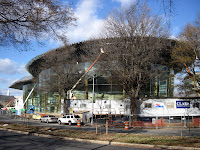 Construction on the new Arena Stage at the Mead Center for American Theater was in full swing in 2009 and was getting attention from bloggers around the city. In June, DCMetrocentric gave a critique of the new theater complex and by November, the structure was fully enclosed. Interior work is now taking place and construction is on schedule for a community day event open to the public on October 24, 2010. The following day, there will be a black-tie opening night gala. Above is a construction photo of the new Arena Stage taken in late December.

Progress was made in 2009 towards creating the city's very own Consolidated Forensic Lab (CFL), but not without delays. On the progress front, MPD's First District moved in April from their old building on 4th Street to their new headquarters on M Street at the former Bowen Elementary School. This move would allow the old headquarters building to be demolished and replaced by the CFL. The city then named Whiting-Turner the contractor for the construction project. However, after the announcement, the mayor had to withdraw the contract after an appeals court ruled that the Mayor skirted city laws when awarding the contract. After more than a five month delay, the city's appellate board dismissed the case a rival contractor had against Whiting-Turner and the city was free to re-award the contract to the same contractor in November and start interior demolition in December. The CFL is now scheduled to open in 2012. Above is a rendering of the CFL, from the CFL website. 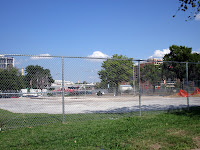 Several parcels in Southwest were leveled during the past year, but not replaced with new buildings, in order to wait for the recovery of the economy. For example, Vornado demolished the Bernstein Liquors building and other small structures at South Capitol and M Street and paved over the site to serve as a parking lot. Eventually, the developer has plans for a mixed-use project. Along South Capitol Street, the Ruben Companies demolished a gas station and the old Taco Bell/KFC site in September to make way for their planned 1101 South Capitol Street office building, which hasn't gotten underway yet. In December, the old Market Inn restaurant was demolished and will most likely be replaced by an office building. Also in December, interior demolition started at the old First District headquarters building on 4th Street. Above is a photo of the lot owned by the Ruben Companies on South Capitol Street, which was taken this fall after the Exxon gas station on the site was demolished. 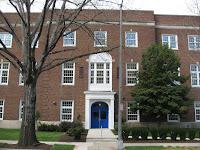 In April, MPD's First District headquarters moved from 4th & E Street to the former Bowen Elementary School at 1st & M Street. In October, there was an open house to welcome the community. The new site is located in the heart of the Southwest Waterfront neighborhood, whereas the former headquarters was north of the freeway in the Federal Center SW area. Despite moving closer to a crime hot spot, a fatal shooting occurred less than two blocks from the new building in mid-October. Above is a photo of the new First District headquarters building, taken right before it was opened.
Engine 13 Not That Unlucky

In February, three developer teams made presentations to the community to garner support for their proposals for the Engine 13 sites at 4th & E Street and 6th & E Street. DMPED ended up choosing the proposal made by E Street Development in April, following the recommendation of ANC 6D. E Street Development is a combination of Potomac Investment Properties, CityPartners, and Adams Investment Group. Their architect is Beyer, Blinder, Belle. Highlights of the proposal include a partnership with community organizations including Kid Power Inc. and D.C. Central Kitchen, LEED-Silver certification, green roof technology, and neighborhood retail along E Street. Approval of the land lease was delayed by the DC Council over the summer, but final approval was given in November. Construction of the firehouse is supposed to start in August of 2010. Above is a rendering of the proposed fire house/office building complex planned at the corner of 4th & E Street, from the February presentation.
Highlands Library

Bellevue will soon get a new library. The new Washington Highlands library was designed by London architect David Adjaye and will be located at 115 Atlantic Street. Once the community saw the plans for the library, there was some criticism of the design. The new library will be three stories tall, contain approximately 20,000 square feet of space, and will aim for LEED-Silver certification. By the spring of 2011, the new library should be open. Above is a rendering of the Washington Highlands Library, from the DCPL website.

Back in November, the JBG Companies began a $40 renovation of the retail promenade at L'Enfant Plaza. The first phase of renovations will be complete in 2011 and will bring a revamped food court to the corridor nearest the Metro entrance. Subsequent phases of the renovation will include a new sculptural glass entryway and expanded retail options. In addition, the developer has plans to expand L'Enfant Plaza by building two new office buildings, an extended-stay hotel, and an apartment building. Above is a rendering of the renovated food court area, courtesy of JBG.
Southeastern University Shuts Its Doors 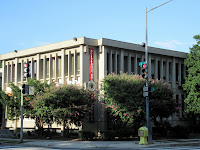 A major institution in Southwest closed its doors at the end of August, when Southeastern University lost its accreditation with the Middle States Association of Colleges and Schools due to financial instability, dwindling enrollment, and a lack of academic rigor. At one point, SEU was in talks with UDC to become a part of that university. Then, it was trying to merge with the GS Graduate School, which is affiliated with the USDA. The University, which had been in existence since the 1800s, had its final graduation ceremony in June. Above is a photo of Southeastern University taken this past summer, located at the corner of 6th & I Streets.
Waterfront Station 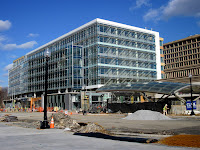 Major milestones at Waterfront Station during 2009 included: the topping off of the two office buildings in March; the installation of the glass and terracotta façade; designs for the Metro plaza; the unveiling of the features of the new Safeway; the addition of a sit-down restaurant to the retail mix; and the paving of 4th Street. The first phase of Waterfront Station will open in the first half of 2010, with two office buildings, a new Safeway, CVS, convenience retailers, restaurants, a Metro plaza and a reopened 4th Street. Above is a photo of the 1100 4th Street building taken in the last week of December.
Posted by SWill at 12:01 AM

Talk about a community service! You are wonderful.

Your work has been fantastic this past year - thank you! Looking forward to the new changes in the neighborhood, particularly at Waterfront Station.

I know some time back there was talk of 4th Street opening before year-end. Any specific update on when the street will go all the way through?

Anonymous #2: The southern part of 4th Street should reopen this month and pedestrian traffic to the Metro will shift there, in order for construction to begin on the Metro plaza. The full street will open by March, when the DC government starts moving into the office buildings.

I agree, SWill: Nobody else does what you do for SW DC. It is not just a service. The need for someone to identify, track and update all the happenings in Southwest would simply go unfilled were you not around. You basically treat this like journalism, and it shows in your approach. You do a good job being thorough, and you always respond to comments. You're really helpful. I'm grateful for your work, and I hope you'll continue to serve in this role for a long time to come. We need you :)