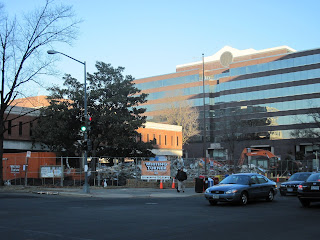 I noticed on Monday that a part of the old MPD First District headquarters building has been demolished by Whiting-Turner to make way for the new Consolidated Forensic Lab (CFL). Interior abatement began last month. At Monday's ANC 6D meeting, it was revealed by Bill Vosburgh, project director of the CFL, that five mature oak trees along E Street cannot be saved during the construction process because their root systems will be severely disturbed as 10'-22' trenches are dug for utilities removal and replacement. As a result, the trees will be cut down and replaced by eight oak trees. In total, there will be 19 new oak trees around the perimeter of the CFL - eight trees on E Street, four trees on 4th Street, and seven trees on School Street. The trees will be 2-3 inches in diameter, which is much smaller than the trees currently on E Street, but they will grow as time passes and were chosen at the suggestion of the city's Arborist as street trees. The tree boxes for the new trees will be connected to the cistern system for the CFL, so storm water can help water them, which will contribute to the LEED-Gold certified rating the project is pursuing.
On another note, a construction camera was set up this past Friday on top of NASA headquarters to track progress at the CFL.
Posted by SWill at 12:02 AM

Thanks for your posts on this project. I follow the press on it, and find that your posts are the most accurate, up-to-date, and helpful. The community is lucky to have you covering this.

One thing Whiting Turner is *not* doing is shoveling the sidewalks around the site.