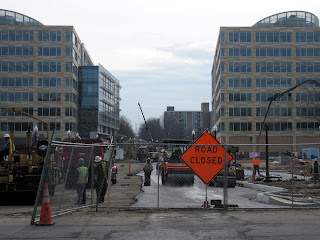 Thanks to a tip from reader David, I was able to snap some photos of asphalt being laid today on the soon-to-be-reopened 4th Street running through Waterfront Station, near the intersection with I Street. The street is inching closer to completion, as street lights have now been installed most of the way from M Street to I Street and grading for the sidewalks is underway. The above photo shows a roller truck flattening freshly laid asphalt on the roadbed. It's just nice to see a sign that says Road Closed, because for decades, there was nothing resembling a road at that spot - the old Waterside Mall was placed in the middle of what will soon be 4th Street back in the 1960s. 4th Street will be open by March, when the District moves into their office space, if not sooner. Below is another photo from earlier today, which shows part of the retaining wall that was rebuilt along part of 4th Street, as well as the Washington Globe streetlights and a construction worker smoothing out cement for the sidewalk under construction. 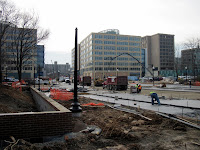 thanks for the post and pictures. From what I've seen they are making pretty fast progress on 4th street, and I'm crossing my fingers that it will be open before March!