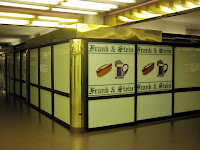 In early November, the JBG Companies, owner of the retail promenade at L’Enfant Plaza, began a $40 million renovation and expansion effort designed by SmithGroup, a national architecture firm. Billed as the only major retail shopping center in Southwest Washington, the retail promenade’s modernization is well overdue. Recently, I took a stroll along the retail promenade and with the gold-looking metal frame around the storefronts, Broadway-style marquee lighting, and 80’s music pumping through the sound system, I felt like I went through a time warp. Above is a photo of a typical storefront at the promenade, which looks very dated. 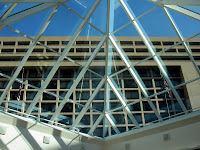 The retail promenade is located below grade at the center of L’Enfant Plaza, a 1960s-era mixed-use complex that was designed in the Brutalist architectural style, with some of the buildings designed by renowned architect I.M. Pei. It connects to three existing office buildings and the L’Enfant Plaza Hotel. A glass pyramid was built more recently in the center plaza and provides the only source of natural light to the shopping center below. Current tenants include Dress Barn, CVS, Radio Shack, PNC Bank, and Au Bon Pain, along with fast food restaurants, a florist, and other convenience retailers. Some retailers on the eastern side of the promenade were relocated to the west side so improvements could begin first on the side closest to the Metro entrance. Above is a view of the north office building from the glass pyramid inside the retail promenade. 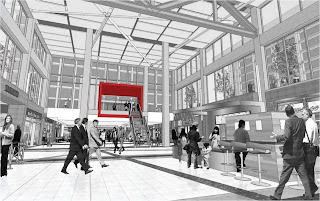 Once phase one is completed in the first quarter of 2011, a food court will be located near the Metro entrance with windows facing the neighboring HUD building, along with outdoor seating for restaurant patrons. At full built-out, the retail center will be 205,000 square feet and will complement the modernist architecture of L’Enfant Plaza with a clean, slick design. A large sculptural glass entryway will replace the pyramid to bring some natural light and visual interest into the underground shopping center. Other restaurants will be located under the glass entryway and storefronts will be scattered throughout the retail promenade. Above is a rendering of the glass entryway, courtesy of JBG. The renovation of the retail promenade is part of the overall revamping of L’Enfant Plaza, which will include the renovation of the north and south tower office buildings, as well as the 370-key L’Enfant Plaza Hotel. The west tower office building, home to the United States Postal Service, is not owned by JBG, and is not part of the renovation schedule. Two new office buildings will be constructed in the center plaza area, an extended-stay hotel will be located in the northeast parcel, and apartments will be built on the southeast parcel. Below are a couple more renderings. 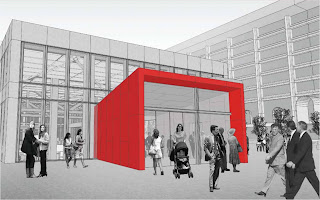 (Left) Here is a rendering of the sculptural glass entryway.

(Right) This is a rendering of the food court, which is a part of phase one of construction.

Apart from the L’Enfant Plaza complex, but along 10th Street, the Washington Interdependence Council plans to build a memorial to Benjamin Banneker, an astronomer and mathematician who helped Pierre L’Enfant plan the city of Washington. Included with the memorial will be the Banneker Institute of Math & Science and a Founding Fathers Walk. In addition, the Monumental Core Framework Plan, released earlier this year by the National Capital Planning Commission and the US Commission of Fine Arts, calls for the redevelopment of the 10th Street corridor as a gateway between the National Mall and the Southwest Waterfront. Construction timetables have not been set for the renovations and new buildings along 10th Street, but once everything is complete, L’Enfant Plaza and its environs will be unrecognizable.
Posted by SWill at 3:58 PM

Won't the construction of two new office buildings in the middle of the plaza along 10th Street merely crowd the space and block light, defeating the whole purpose of the new glass-enclosed entry area to the promenade? Please enlighten me (if possible). Also, I think they should retain the pyramid theme in the skylight - it ties in nicely with the pyramid skylights a couple of blocks away at the Sackler and African Art Museums. That red entry way in the renderings looks bizarre (to me).

Anonymous 8:55 pm: The office buildings are still in the design phase, but from the preliminary renderings they appear to have a glass facade, which should help reduce the loss of light. The renderings in the post that show the red box comes from a black and white brochure that had a red theme to it, so I don't think that box will actually be red when built - it was done more for artistic reasons in the brochure.

Dave-O: I'll look into it and see what I can find out about potential tenants.

Five Guys is coming for sure. I saw one of the construction doors open and there was one of those red posters that said "Coming soon: Five Guys." If you came off the metro and go straight through the glass doors, the wall you are facing has double doors (instead of making the 90 degree right turn). Its going to be back there. Hopefully more too!