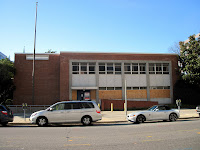 This evening I noticed that fencing has been put up around the perimeter of the old First District headquarters on 4th Street, which means demolition can't be far behind. About a month ago, there was a ceremonial demolition ceremony at the site, right after Whiting-Turner was renamed the contractor for the CFL project. By 2012, the new CFL should be complete, which will house MPD's Crime Lab, the Office of the Chief Medical Examiner, and the DC Public Health Lab. Above is a photo of the old headquarters building taken last Saturday, before the fencing went up.
Posted by SWill at 12:20 AM

Demolition workers have been inside the building for several days, probably removing asbestos and other hazardous materials.

In nearby news, the Market Inn has been demolished! I assume it will be a parking lot until the economy improves. I understand an office building is planned for the site.

^^ I still want a Wawa for the Market Inn site. Think about it, space for a gas station right off a highway (as the gas pumps seem to be their main business plan right now), tons of office workers to buy sandwiches and coffee throughout the day, then residents to buy food on the way home or later on. I know, it would never happen, but I can dream...

A gas station? In Southwest? I don't believe it. But it would be nice.

Eww...no. No gas station. What a disgusting addition to a neighborhood. Gas stations detract from local character rather than adding anything to it.

What would be the difference between a gas station and a propane tank retailer either? Gas stations are smelly, dirty, and bring huge tankers down our side-streets. Not to mention the hideous concrete slab. No thank you!!