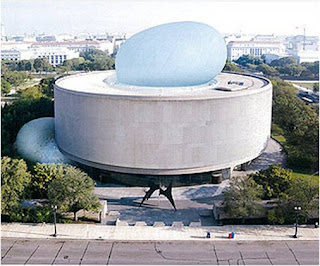 The Washington Post reports that the Hirshhorn Museum and Sculptural Garden has plans to create a temporary structure twice a year (in May and October) starting in 2011. The museum is located at the corner of 7th Street and Independence Avenue to the west of the Air & Space Museum on the National Mall.From the article:

On the drawing board is a 145-foot-tall temporary inflatable structure that's intended to sit in the concrete-bound courtyard and balloon through the top of the building...Made of a strong vinyl material, it will protrude like a mushroom, providing a strong contrast to the doughnut-shaped main building...The estimated budget for the inflatable addition is about $5 million...and the museum plans to raise an additional $5 million for storage and programs. The plan has been presented to the Hirshhorn's board and the Smithsonian Board of Regents, and the staff is planning informational meetings with the National Capital Planning Commission and the U.S. Commission of Fine Arts.

The inflatable addition, as seen in the above rendering from the Post article, was designed by Diller Scofidio and Renfro.
Posted by SWill at 9:38 PM

As an artist, I'm all for promoting art...but seriously - $5 million for a freakin' balloon? Unless it's a giant pinata stuffed with 3 Musketeers bars, they can keep their overpriced vinyl. Ugh.

I'm not that into modern art, so I guess that's why I really don't understand the design at all. It looks hideous to me, but I guess it fits the Hirschorn.