Signs of What's to Come Along the New 4th Street 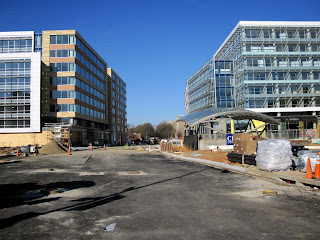 Curbs, sidewalks, asphalt, trees, display panels...all of these are signs of what's to come along 4th Street at Waterfront Station. The office buildings are about 90% complete, according to Gordon Fraley of Vornado/Charles E. Smith, who gave the community an update on their project at Monday's SWNA meeting. The tenants (DC Government agencies) will start moving into their new space in March and April of 2010. Since most of the building construction is complete, some of the final touches are being put in place. This afternoon, I took some photos of the progress being made at the project. Above is a photo of the view along 4th Street looking north from M Street. Asphalt is now down on the street and curbs & gutters are visible. On the West Tower (left building), trees have been planted on the south-facing side of the building. Within the next month, the pathway to the Waterfront-SEU Metro entrance will be temporarily shifted from its current location next to Safeway over to 4th Street, so work can begin on the Metro plaza, which was designed by Oculus. 4th Street is now scheduled to reopen in the last two weeks of March. Below are a couple close-up photos of the project. 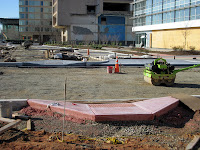 (Left) Here is a view of the improvements being done on 4th Street, including new curbs, sidewalks, and crosswalks. The newly planted trees are also visible on the side of the West Tower. The View at Waterfront and Arena Stage looms in the background. 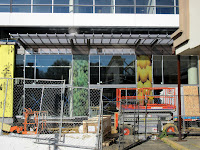 (Right) On the East Tower, display panels of grapes and lemons are an indication that a grocery store will soon open on the ground floor. Tenant build-out for the urban-lifestyle Safeway began in September and the store is scheduled to open around April 2010. The tenant build-out at CVS will take less time - it will begin in January and the new store will open in March. There are four retail spots still available at Waterfront Station that haven't been taken by tenants who have signed letters of intent.
Posted by SWill at 8:11 PM

I'm quite excited to see the progress.

Can't wait for 4th street to reopen, hopefully it will be before the onset of the coldest winter days (seeing that it doubles my walking time to the metro...).

And if our Safeway looks anything like the CityVista model, we're in for a real treat!

Anonymous: The only part of 4th Street that will be open in the next month will be a path from M Street to the Metro entrance. If you're coming south from I Street, that portion of 4th Street won't reopen until March.