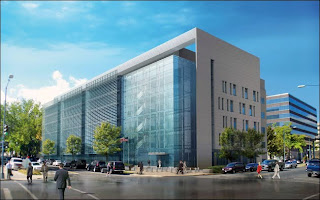 Last week, DC Metrocentric reported that the case a rival contractor had against Whiting-Turner, the contractor the city chose in May to build the new Consolidated Forensic Lab (CFL), was dismissed by the city appellate board. The city wasted no additional time once the case was dropped, because today, the mayor announced once again that Whiting-Turner has been selected to build the CFL with a $133 million contract, six months after the original announcement. At the press announcement, the mayor ceremoniously took down a portion of the rear wall of the old first district headquarters, which is located at 415 4th Street. However, interior abatement must occur first before the old hq building can be demolished to make way for the CFL. The CFL will be home to MPD's Crime Lab, the Office of the Chief Medical Examiner, and the DC Public Health Lab. A total of 300 - 350 employees will be housed at the facility. The Hellmuth, Obata + Kassabaum, PC-designed building will aim for LEED-Gold certification and will cost $220 million to build. It will be 287,000 SF and 6-stories tall, will accommodate 160 underground parking spaces and 60 street-level spaces. Construction should now be complete by 2012, due to the delay, instead of the original fall 2011 deadline. Above is a rendering of the CFL from the CFL website.
Posted by SWill at 9:40 PM

About time! This will be a boon to both SW and the city.