All You Need is Gov...Patriots Plaza Nabs USDA 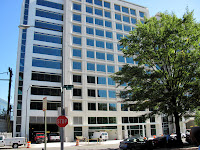 The Washington Business Journal reports today that the US Department of Agriculture will occupy most of the phase III building of Patriots Plaza. The GSA signed a lease on behalf of the agency for 330,000 SF, which accounts for about 87% of the building. From the WBJ article:

The General Services Administration negotiated and signed the deal on behalf of USDA, which is consolidating five other locations throughout the District and Northern Virginia. Patriots Plaza III was completed in September — USDA will begin moving into the building in December 2010.

The phase I building is fully leased to the feds while Patriots Plaza II is still without tenants, so with the USDA announcement, the 980,000+ SF three-building LEED-Silver certified complex is now 62% leased. Since the tenant is the federal government, it’s highly doubtful that ground floor retail will move into Patriots Plaza, as the developers mentioned as a possibility when they were vying for the Engine 13 RFP in February. However, this announcement may help get a restaurant to move into the ground floor of Capitol View, which is down the block from Patriots Plaza on D Street. Above is a photo of the phase III building taken last month.
Posted by SWill at 5:00 PM

Is the Phase III building the one that fronts on 4th Street or on E Street? (I'm assuming it's the one on 4th Street). Glad to know that that building will not be vacant!

Even before it was built up, the 4th Street corridor between E Street and the railroad tracks at various times in my memory hosted ground floor retail or other public uses, including a bank, Wax Museum restaurant, Chinese carryout, and Gold's Gym (before it moved around the corner). So now that it's built up and substantially leased, I would think it should support more and greater retail.

Further, other neaby USDA locations have retail (6th and Maryland Avenue, and the undergound promenade at the main Agriculture building at 12th and Independence). I would also think that USDA as a tenant would be sensitive to the need for a restaurant, since their mission is agriculture. - Keep hope alive!

Anonymous: You are correct, the Phase III building fronts 4th Street. My feeling about ground level retail is the developers made that statement back in February to try and sway the public to support their bid for the Engine 13 site, but never really meant to actually put retail at Patriots Plaza. However, that sentiment is just the cynic in me and not based on any evidence from the developer :-) Start lobbying the USDA/GSA to request the developers to put in ground level retail!

Hi! I am a student at the American University and I am currently doing a research project on the neighborhood blogs in the DC area. I would like to email you a five-minute survey on your neighborhood blog, but I can’t find contact data here. Could you please send me an email to brandrike(at)gmail(dot)com so I can send you the survey? You would greatly help me with my research. Thank you! Rike