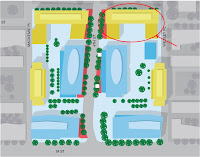 An article in this month's Hill Rag (now available online) states that the city will be "patient" with the land they own at Waterfront Station, the northeast parcel as seen circled on the map at the top of this post. The city retained a portion of the Waterfront Station site as a result of their land sale negotiations with the developers a few years ago, in order to increase the number of residential units planned at the project. Sean Madigan, communications director for the Office of the Deputy Mayor for Planning and Economic Development, states the following about the timeline for residential development on their parcel in the Hill Rag article:

But with the housing market being what it is, we are probably going to be a little patient on this one and not put it out on the street for bids until conditions improve.

In the meantime, their parcel, along with the other undeveloped parcels, will be grassed over until these sites get built, as David Smith from Waterfront Associates mentioned at last month's Safeway town hall meeting. Three other residential towers will be built by the developers in later phases, including the adaptive reuse of the two old EPA buildings.
Posted by SWill at 11:32 PM

There aren't four new residential towers being built, but rather two new buildings and the rehab of the two IM Pei towers that currently sit there in all their windows-broken-and-no-one-cares glory.