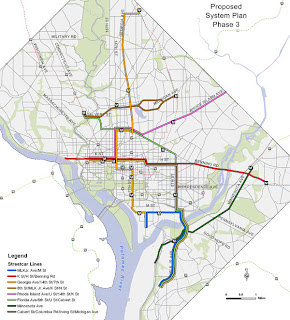 Last week, DDOT began holding meetings in each of the eight wards to explain their plans for the return of streetcars to DC. The proposed 37-mile streetcar network will include eight lines and will be built in three phases during the next 7-10 years. One of the lines is already under construction in Anacostia (the blue line on the map, from DDOT's website), and will terminate on 1st Street in Buzzard Point. Once all three phases are built, there will be two lines that run through Southwest and terminate in Buzzard Point. The second streetcar line (the orange line on the map) will run along M Street and go north on 7th Street towards downtown. Currently, Buzzard Point is a no-man's land of sorts, with industrial operations, a few office buildings, including the current headquarters of the U.S. Coast Guard (although they are moving to the East Campus of St. Elizabeth's), a couple marinas, and Fort McNair. Buzzard Point is a part of the Capitol Riverfront BID, which also covers most of Near Southeast. While there has been substantial development on the Southeast side of the BID, nothing has happened yet in Buzzard Point. Akridge has plans to develop a secure office campus at 100 V Street (the same site was rumored a few months ago as a possible site for D.C. United), but no tenants have been found yet. A few years ago during the height of the housing market bubble, Walnut Street Development had plans to build a condominium project in the area, but those plans were scuttled. With an investment as substantial as a streetcar network coming to Buzzard Point, the Southwest part of the Capitol Riverfront BID may soon start to see some development activity, or it may just be a convenient place to build a maintenance facility. DDOT officials tout the amount of private investment that Portland's streetcar system brought to neighborhoods along its route, so they are banking on a similar effect here in the District. We shall see...
Posted by SWill at 10:30 PM

Glad to see there are some great plans on the way. Let's keep the pressure on to make sure DOT follows through...