A Peek Inside First District Headquarters 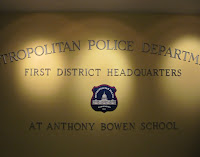 Last night, MPD's First District held an open house to celebrate the opening of their new headquarters building, which is located at 101 M Street in the old Anthony Bowen School. Also, the First District was named best police station this year and October is National Crime Prevention Month, so there was a lot to celebrate. As a part of the festivities, there was a police horse outside of the station, presentations by Commander Kamperin and Council members Wells & Mendelson, catering by Hogate's Cafe, as well as tours of the facility. Below are some photos from the tour I took of the First District HQ. The above photo is a sign on the wall near the entrance to the police station. 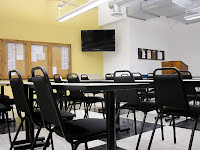 (Left) This is the Roll Call room on the second floor, where officers gather to receive their orders. It still looks like a classroom. 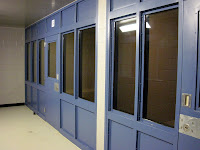 (Right) The holding cells are located on the ground level. There are separate holding cell area for men and women. 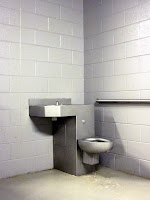 (Left) Here is a photo of the toilet and sink in the "bullpen," a larger holding cell where groups of prisoners are kept. There were no prisoners held at the First District station during the open house.
Posted by SWill at 7:07 PM