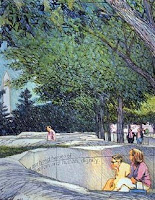 According to an article in The Washington Post, the planned MLK Memorial near the Tidal Basin has received all necessary approvals from the National Capital Planning Commission in a special meeting held on Monday night. With these approvals in hand, the National Park Service should issue building permits by early November so construction can begin on this long-awaited memorial. The Post article describes the memorial as follows:

The memorial is planned for a four-acre crescent-shaped site amid the cherry blossoms on the northwest shore of the Tidal Basin. The centerpiece is to be a 2 1/2 -story granite sculpture of the slain civil rights leader. Called the Stone of Hope, it depicts King standing with his arms folded as if emerging from the stone. At 28 feet, it will be eight feet taller than the statue of Abraham Lincoln in the memorial to the 16th president and will rest on pilings driven as far as 50 feet down to bedrock.

Construction should be complete in late summer of 2011. Above is a rendering of the planned memorial, from the MLK Memorial website.
Update: The WBJ reports that Department of Interior Secretary Ken Salazar signed a construction permit on Thursday at a ceremony on the National Mall, which means the memorial can now be built!
Posted by SWill at 11:57 PM