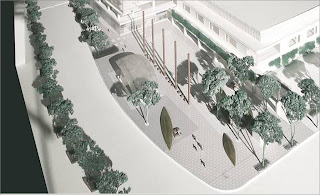 Construction moves along at Waterfront Station, including the Waterfront-SEU Metro plaza, which was designed by Oculus, a DC-based landscape architecture firm. To the right is a rendering of an aerial view of what the plaza will look like, from Oculus' website. It will be nice to see all of those trees lining the newly reopened 4th Street, as well as the plaza itself! From the rendering, it appears that the plaza will have pavers of varying size. The building to the right of the five poles isn't a part of phase one of Waterfront Station. The current Safeway is located at that site and will be demolished after the new store opens in the East Tower building in 2010. Below is a street-level rendering of the plaza, looking north from M Street.

The white rectangle on the right side of the image is the Metro elevator. What do you think of the Metro plaza design?

Overall I like it. I'm not sure what the five poles are for... are those supposed to be flagpoles?

A fountain would be nice there, but I understand that this area has a lackluster record of maintaining fountains...

What happened to all the sidewalk cafes and retail space?

Thanks for the update! It's been a long time coming and the new Waterfront Station will be a great improvement to Southwest.

It's a shame that everytime we see new renderings, they've been scaled back. Obviously anything will be an improvement, but I really hope this development will breathe some much needed life into the area. Those five posts are odd. I don't quite get it.

So are they gonna throw some bushes on the old Safeway to cover it up, until they tear it down? Maybe they can do the same with the ugly EPA buildings.

I am excited at the new development in the quadrant. I just hope that the development includes, income restricted housing for the less fortunate residence of SW.

BTW...That Safeway, though convenient is disgusting. I'm glad that its going to be rebuilt. GO NATS!!!

nothing spectacular but it is definitely an improvement