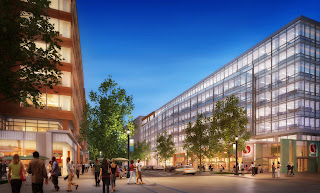 There was a spirited debate tonight at the Safeway Town Hall meeting, which lasted three hours with almost every seat filled at Westminster Presbyterian Church. Robert Sockwell, chair of the Southwest Safeway Task Force, moderated the discussion, which included representatives from MPD, Waterfront Associates (the developer of Waterfront Station), and Safeway. Also in attendance at the meeting was Ward 6 Council member Tommy Wells and At-Large Council member Phil Mendelson. The meeting was prompted by Safeway's request for a Class B liquor license, which would allow them to sell beer and wine in the new store. ANC 6D protested the request at their July meeting as a way to negotiate with Safeway over outstanding community concerns regarding the poor condition of the current Safeway and expectations moving forward (in both the current store and the new store opening next year). First up was Lt. Nicholas Gallucci from MPD's 1st District, who went over security concerns at Safeway. He stated that the Southwest area has experienced the second most dramatic reduction in crime in the city over the past couple of years and the area near Safeway is no exception. MPD has been patrolling the Safeway parking lot as of late, as a courtesy, even though they are not responsible for securing private property. Next was David Smith from Waterfront Associates, who mentioned a few new tidbits about phase I of Waterfront Station:
Afterwards, representatives from Safeway described what was being planned for the new Safeway and how community concerns have/will be addressed. Avis Black from Safeway went over the plans for the new lifestyle concept store:
Tom Harris and Peter Neth from Safeway addressed issues at the current store, including security, proper stocking of items, their rain check policy, cleanliness, and staffing, namely the lack of customer service. After their presentations, the audience had a chance to ask questions of the panelists. A lot of the questions were prefaced by an anecdotal story about a bad experience at Safeway (we all have them don't we?), followed by a demand for action. The Safeway representatives will meet with the task force once a month to go over their progress in addressing these long standing issues. (Above is a rendering of the exterior of 1100 4th Street, with the new Safeway on the ground floor, courtesy of Vornado)
Posted by SWill at 11:42 PM

Thanks for this. Looking forward to eharing who the retailers are -- especially the restaurants!

Thank you so much for this report - your blog is routinely an incredible source of information on the neighborhood. So excited to hear that there are 3-4 restaurants planned for the area! Did you have a sense if they would be "sit down"? The chance to actually have a meal and a couple of beers with friends (without going to a hotel) is sorely missing in our neighborhood.

Again, thanks for your hard work!

I second that - great reporting!

I too hope that we get some sit-down establishments. Potbelly's & Subway (lunch-only places)definitely have their place, but so does something like a TGIFriday's or Legal Seafood where you can sit down for a nice dinner.

My coworker and I are desperate for some place in the neighborhood here you could enjoy a Sunday brunch, like Luna Grill.

Regardless of what comes in, we in the neighborhood are going to have to support them. Otherwise we could run the risk of another Waterside Mall "ghost town" years down the road.

David Smith from Waterfront Associates mentioned there would be a mix of fast casual and sit-down restaurants. I also forgot to mention that there won't be a liquor store selling spirits in this phase of development, but granting Safeway a Class B liquor license doesn't preclude the developer from bringing in a liquor store in future phases.

This is very exciting news! I'm eager to see how the new Safeway looks and operates after being open for six months or so. Thanks for the update!!

A couple of things:
(1) Safeway said in Q&A that they wouldn't protest another grocery store opening up nearby, but in response to a similar question later on, it came out from the developer's mouth that the lease signed with Safeway precludes a second supermarket (such as Harris Teeter or Trader Joe's) from leasing space from the developer nearby. This seeming contradiction went unnoticed and unmentioned at the town hall meeting. Theoretically, there could be a semantic difference between "supermarket" and "grocery store" that makes it possible Safeway was being truthful, but it is also possible they were being evasive because they were figuring we wouldn't know or find out the details.

(2) In Q&A, I asked and found out a couple of things:
(a) the current Safeway's bathrooms are already open to customers as of the last few months
(b) the new Safeway will specifically have three women's stall, two men's stalls and a urinal, and they'll probably be cleaned every half hour in the beginning and then eventually every hour as is usual in their other stores
(c) Safeway carries and will carry wherever possible local produce, which they remarked as including NJ, PA, MD, etc
(d) Safeway has no plans to raise prices in the new store just because it is new [the exact question was a request for a commitment to a maximum average percentage price increase from the old to the new Safeway]

(4) you mentioned the floral department a second time redundantly.

(5) Did they mention the hours for the new store?

(6) One nice man there said that if anyone has any problems that they need the Safeway team to address, to call or email him; I think his last name was Muckles if I remember coorectly-- anybody get or need his contact info? I only have his phone number but prefer email in case it's needed. Thanks.

(7) Give Safeway credit for responding to withering criticism with positivity, honest acknowledgment of mistakes, and expressing a seemingly sincere desire to do right by the community going forward.

(8) I agree that your reporting on this has been helpful-- thanks!

thanks for the update cant believe i missed the meeting.