Emelina Back in DC 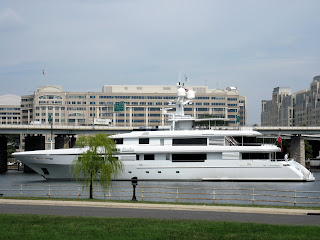 She’s BAAAACK. This morning, I noticed the yacht Emelina was docked at the Capital Yacht Club along the Southwest Waterfront. She was last in DC in June, but since then, readers from DC to Maine have been tracking her progress along the Eastern seaboard. As of Sunday, she was in Philadelphia, making her way back south from spending the summer in New England. When I saw the yacht today, there were five MPD vehicles lined up along the shoreline at East Potomac Park near where she was docked and I found that to be strange. Later, I checked out DCist and they reported that a body has been found on a boat at the Capital Yacht Club. More details to come.
Update: The AP is reporting a man's body was found under a dock this morning around 9am near the Capital Yacht Club and police are investigating.
Update #2: I heard on WTOP radio that the body was that of a 50-year old woman whose father owns a yacht at the Captial Yacht Club. So far, no foul play is suspected.
Posted by SWill at 9:50 AM

I posted a comment in the June post, but I took a little ride down along Haines Point to check her out this evening. Very nice yacht. I also wonder who owns it...