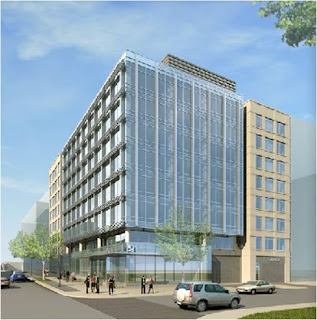 A reader pointed out to me that the old KFC/Taco Bell at 1101 South Capitol Street is in the process of being demolished. Once I get back into town from a mini-Labor Day weekend vacation, I'll get some updated photos of the site. The Ruben Companies owns this site and another one on the other side of South Capitol. Plans seem to be further along on the SE parcel, but the last we heard about 1101 South Capitol was in February, when the developer was seeking a variance and an exemption from the Board of Zoning Adjustment (BZA). However, the application was withdrawn in July. On the Ruben Companies website, a project page for 1101 South Capitol has reappeared, but not much information is available, besides a rendering of the planned office building (displayed above.)
Update: Below are a couple of photos showing demolition work at the site. It was pretty cloudy on Monday, but you can still see that the remnants of the KFC/Taco Bell building will disappear soon. 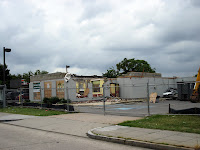 (Left) Here is a photo of the partially demolished building along South Capitol Street. At the far left of the photo is the 7-Eleven, which is owned by Vornado, along with the parking lot behind 1101 South Capitol. 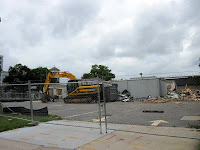 (Right) This photo shows the construction equipment being used to demolish the former restaurant. In addition to 1101 South Capitol and 1100 South Capitol Street, SE, the Ruben Companies also owns a parcel on the 1000 block of South Capitol, which backs into the post office located along Half Street.
Posted by SWill at 2:31 PM