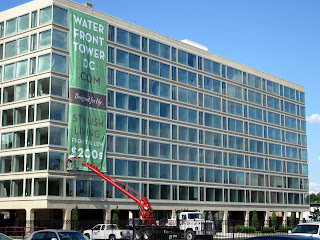 This afternoon I noticed a large banner being erected on the (formerly known as) Town Center Apartments on the corner of 3rd & M Street. Southwest now has a second condominium conversion project and it's called Waterfront Tower...it even has a blog. The Bernstein Companies and Peak Development, along with the former tenants of Town Center, have converted the 1960s-era building into condos, with prices starting in the low $200s for studios up to two bedroom units starting in the low $300s. The Mayhood Company is marketing the project and Abdo Development is the general contractor. This is the last building in the four-building complex surrounding Waterfront Station to be renovated. Last year, Bernstein renovated 1001 at Waterfront as apartments and Fairfield Residential also renovated Marina View Apartments, now called The View at Waterfront, which is on the west side of Waterfront Station. According to the website, interior features include Caesarstone countertops, breakfast bars, CleenSteel appliances, Mecho Roller shades for all windows, hardwood floors and carpet. Project amenities at Waterfront Tower include a fitness center, entertainment lounge with kitchen area, a courtyard/BBQ area, security cameras, front desk attendant, bike storage, and parking. Once I get more details about the project, I'll let you know. Above is a photo of workers putting up the new sign on the building. 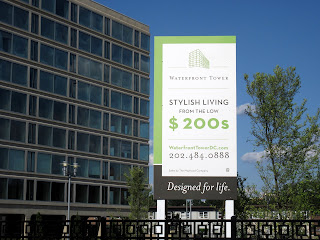 This sign was posted in the parking lot near the front of Waterfront Tower.

I'm going to be looking to move into the city or at least Arlington County next year, and these places don't look bad at all. Perhaps the 2BR floorplans could be more "roommate-friendly" which would make them more attractive investment properties as well.

Project looks great!!! This is an IM Pei original design....too bad I am moving out of town.....once in a lifetime shot to live a Pei bldg!!!