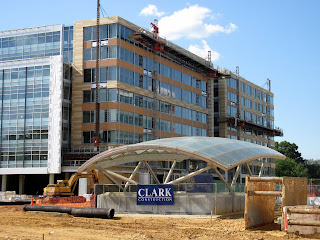 On Friday afternoon, I took a stroll around the neighborhood and snapped some photos of several construction projects in the area, including Waterfront Station. As you can see from the photo at the top of this post, the terracotta facade is now being installed on the West Tower. Below are some more photos I took of the project from different vantage points. 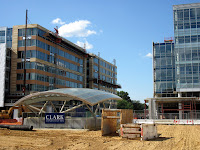 (Left) Here is a view of the two office towers, with the Waterfront-SEU Metro station entrance in the middle, as seen from M Street looking northwest.

(Right) The East Tower hasn't received the terracotta facade treatment yet. This is the building where the new Safeway will be located and will deliver a couple months after the West Tower. 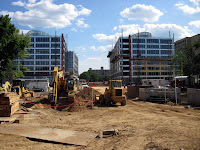 (Left) This shows the 4th Street right-of-way looking south from I Street. Demo crews removed most of the remaining park space that connected I Street with the plaza at Waterside Mall. 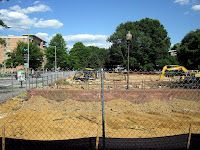 (Right) You can more clearly see in this photo looking eastward how most of the park area has now been cleared away. Only part of a brick wall, guard rail, and street lights have yet to be removed.
Posted by SWill at 11:19 PM