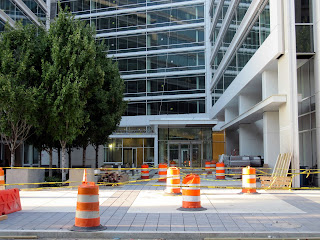 Construction is wrapping up at phases II & III of Patriots Plaza, the massive office building complex being built by Trammell Crow. Last week, crews were installing curbs and the sidewalk in front of the new buildings. Today, the sidewalk along the north side of the 3oo block of D Street was reopened to pedestrians. While the entire sidewalk isn't complete yet, enough of it has been put in place that pedestrians can now walk by safely. While no tenants have been lined up yet at phases II & III of Patriots Plaza, I saw moving vans over the weekend at nearby Capitol View, the office building at the corner of 3rd & D Street, presumably for the Association of American Railroads (AAR), which is scheduled to move into the space in September, as Southwest...TLQTC posted back in March. Above is a photo of the entrance plaza to the phase II & III buildings, taken from D Street. The entrance to the phase I building is at far left, behind the tree.
Update: Below are some more updated photos of Patriots Plaza. 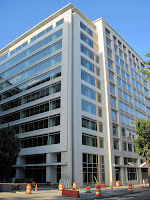 (Left) Here is a photo of the phase II building. Follow this link to a post from December to see what the site looked like as the building rose from the ground. The phase II building has frontage on D Street and is across the street from NASA headquarters. 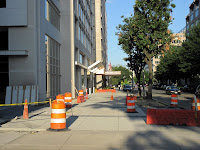 (Right) Here is a view of the reopened sidewalk along D Street, looking east from Patriots Plaza to the Marriott Residence Inn next door. 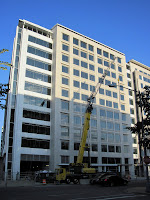 (Left) Most of the phase III building fronts 4th Street. The sidewalk in front of the phase III building remains closed as construction appears to be less further along on this side than on D Street. When Trammell Crow was in the running for building the new Engine 13, a representative from the developer stated at the community meeting in February that there was a possibility that portions of phase II & III of Patriots Plaza could have ground floor retail space. It depended on the needs of the tenant. However, to me, the design of the buildings don't look like ground level retail could be accommodated, at least publicly accessible retail.

While I try to check your blog regularly to see what's going on, your writing style seems a bit self-centered. There aren't many postings on your site so I thought I might bring this to your attention as it tends to turn me off when I read postings containing:

It's almost as irritating as listening to Comcast commercials on Comcast TV.

Anonymous- Thanks for your comment. My intention is not to be self-centered. The purpose of referencing previous posts to readers is so I don’t have to repeat myself if I’m blogging about a topic that has been covered in the past. The reader can click on the link provided and read what was said previously. I have always referenced the source(s) in my posts, whether it be my blog, another blog, or another media outlet. Perhaps I don’t have to mention the name of my blog every time I reference something I have reported on previously, since I can’t plagiarize myself, or at least I won’t sue myself for doing so. :-) Blogging is still relatively new for me, so constructive criticism in my writing style is welcome. Thanks again!

If the worst criticism anonymous can come up with is referencing your blog too much, you're obviously doing a great job!