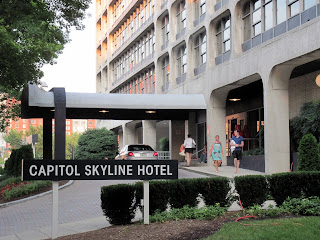 Yesterday, I finally got a chance to check out a pool party at the Capitol Skyline Hotel. Sunday was the first Spike'd Cinema event (see my post from Thursday). I got there a little after 2PM and the place was packed! There were people of all ages - most of them appeared to be in their 20's or 30's, but there were also a few children and older people at the pool too. The lines were long all day at the bars, but the wait staff came around to take drink orders and delivered "complementary" burgers to guests. Specialty drinks, such as the Skyline Blue Margarita, are $5 and beer cost $4, which is pretty reasonable, compared to most trendy bars in the city. There was a DJ keeping the party going with a good mix of music. Coincidentally, it was the same day that cast members from MTV's The Real World and their camera crew showed up at the pool. They ended up setting shop right next to where my friends and I were sitting. Below are some photos of the pool area and hotel lobby. 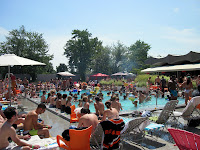 Here is a view of the crowded pool at around 2:30 in the afternoon. One side of the pool had a pretty intense game of "pass the beach ball" while the other side was more tranquil with a few floaters. 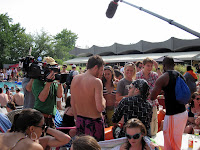 Spike Mendelsohn (in the purple and black swimming trunks) from Top Chef and proprietor of Good Stuff Eatery on Capitol Hill, was chatting it up with some of the Real World cast members poolside. The ever present camera crew was there to get every last word. 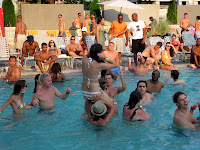 Later on, some of the cast members got in the pool and started chicken fighting. Once The Real World DC goes on the air, be on the lookout for the episode when they venture to the Capitol Skyline Hotel in Southwest! 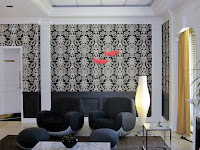 The hotel lobby was also redone during the renovation. The lighting in the room was wrecking havoc on my camera, but I did manage to get a decent shot of this corner area. The lobby and pool area look great...now if they only power washed the concrete exterior and did something about those worn blue panels by the windows (see photo at the top of this post). 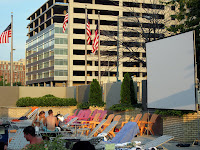 The movie screen was set up at the far end of the pool. I didn't stay long enough for "Anchorman," so I don't know how many people ended up staying for the film, but there were still a good amount left when I went home a little before 8PM.
Posted by SWill at 10:40 PM

The cast is at the Capitol Skyline pool every Sunday. Likewise, Spike hosts that party regularly.

RealWorldDCNewz, unlike you, not everyone is aware of exactly what that crew of idiots does with their every minute. Also, I think the blogger knew it was a regular thing for Spike, but keep letting self-importance ruin the tiny, good thing you've got going.

Anon... why does the cast of Real World have to be "idiots?" Seriously, what have they done to you?

I don't understand why people have this internal hatred for these kids. They're young, single, having a good time and were lucky enough to be cast on a show that allows for all this. I think most people in their early 20s would probably do the same thing.

I was at Capitol Skyline Hotel. It was pretty easy to ignore the cameras and crew. Let them do their thing and they won't bother you. If you want to be pissed at someone, be pissed at the entourage of people that follow these kids around like they're actual celebrities. Otherwise they're just another group of young twenty-somethings partying it up in DC. Things could be worse.