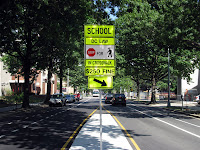 - New signs posted along I Street: During my stroll on Friday, I noticed that new signs have been posted near Amidon-Bowen Elementary School warning drivers that they can receive a $250 fine if they do not stop for pedestrians at a crosswalk in a school zone. These signs and other improvements in the area are a result of the "Safe Routes to School" program that Amidon-Bowen is participating in and Southwest...TLQTC originally reported on this last August. 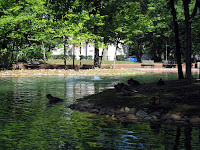 - Fountains functional again at Town Center Park: I also noticed that the fountains at Town Center Park are bubbling once again after they were out of commission for the second time in the past couple of months. Back in June, the fountains were fixed after the park was transferred from NPS to the city. Then in July, the fountains stopped working again and there was a danger that standing water could allow West Nile Virus-borne mosquitoes to breed in the pond, since the virus was found a few blocks away near Fort McNair.
Posted by SWill at 11:32 PM