Southwest...The Little Quadrant That Could Turns One! 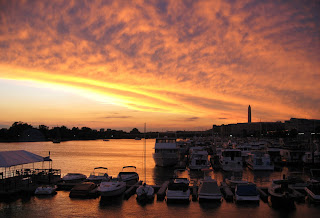 Today is the one year anniversary of the creation of my blog - Southwest...The Little Quadrant That Could, a blog dedicated to the good, the bad, and the ugly in Southwest, the smallest quadrant in the District of Columbia. My very first post from a year ago had to do with the redevelopment of FEMS Engine 13 and a second vacant parcel on the corner of 4th & E Street. Since then, I've written more than 170 posts - tracking several development projects in the neighborhood, including Waterfront Station, the Southwest Waterfront, the new Arena Stage, Constitution Center, and the Consolidated Forensics Laboratory, just to name a few. While primarily writing about development, I've also written posts about other neighborhood issues, like crime, road construction, and the need for a BID.
In other news, I noticed yesterday that Waterfront Station banners have gone up along the construction fence at the intersection of 4th & I Street, where in a few months, 4th Street will run through the old Waterside Mall site for the first time in over 30 years. Also, I saw a Shuttle Bug bus decorated with colorful advertisements for Waterfront Station. Unfortunately, I didn't get my camera back from the cab I was riding a couple weeks ago, so I haven't been able to take photos recently. A new camera has been ordered, so I'll be taking new photos hopefully by next week!
Posted by SWill at 12:00 AM

Please do a "shout out" for Artomatic a ten minute walk from Waterfrt Mall area- 55 M St. SE. I have work there and artists will be there with their work on June13 evening. Judith Claire, 4th and N SW

congratulations and please continue to spread the good word about SWDC!