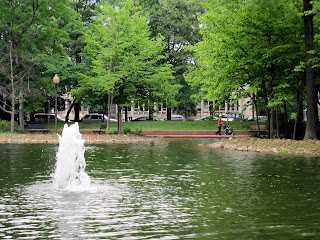 The fountains at Town Center Park were operational again when this photo was taken on June 16th and the grass has been cut. Earlier this month, standing water in the pond and poorly maintained grounds were causing a health hazard (i.e. mosquitos). See these two posts from Ward 6 Council member Tommy Wells' blog for more background on the transfer of the park from NPS to DPR and the resulting deferred maintenance. 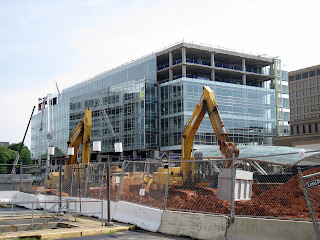 This photo was taken on Friday morning. Construction continues along the soon-to-be-opened 4th Street next to Waterfront Station. It was a little difficult to get around, since jersey barriers have been erected on the northern edge of M Street from the 4th Street intersection to the Bank of America trailer. Also visible in this photo is the East Tower of Waterfront Station, which is a little less further along in construction than the West Tower. 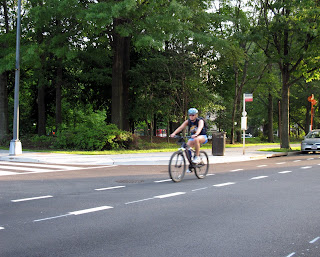 This photo was taken on June 7th. Bike lanes have been installed by DDOT on both sides of I Street between 6th Street and 3rd Street.
Posted by SWill at 8:44 PM