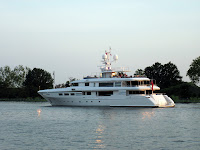 While I was enjoying a beautiful evening at Cantina Marina on the Southwest waterfront today, I spotted a large yacht traveling south on the Washington Channel called the Emelina. According to the Emelina's website, the yacht is a massive 167 feet long and was made in Italy less than a year ago. Does anyone know who owns it? Last summer, I saw an even larger yacht in the channel called Seafair, which is an exposition yacht. (Above is a photo of the Emelina yacht, taken from Cantina Marina this evening with my new camera).
Posted by SWill at 9:21 PM

I saw her coming back in this evening... also from Cantina, nice day for it! I don't know anything about the yacht though.

Emelina is now in BOSTON, docked in the Charlestown Navy Yard. What a beautiful yacht! I am interested in the owners and if it's charted out to others?? It has been docked twice here on Pier 1 over the past few weeks.

We are staying at the Marriott Residence Inn where the Yacht has been docked since our arrival on Aug 3rd. It has a huge English flag flying from it, and Paul McCartney is in town playing at Fenway.....my guess is it is him. We have sat outside and watched the boat crew and staff...everyone seems very secretive. McCartney's last concert is today Aug.6th...it will be interesting to see if it leaves tomorrow.

It looks like she is making her way up the Eastern seaboard. Back on July 30th, a Newport, RI blog reported she was in Narragansett Bay.

This yacht isn't chartered out. It isn't Paul McCartney's, or anyone else famous either. It is currently in Maine.

The Emelina was in Stover's Cove, Harpswell, ME last night (August 10). She is the third of her type to use the anchorage in the past two weeks. The first was the Mea Culpa; the second was the Lady Christine.

The Emelina is now in Boothbay Harbor.

Just spotted her outside New Harbor, Maine as we we came back into harbor on the Hardy boat from Monhegan this afternoon.

She was anchored outside of South Freeport harbor in Maine last night, and was seen this morning heading out towards the islands. Everyone on the Bustins Island Ferry had a good laugh upon seeing someone lifting weights on the top deck.

Emelina spent Sunday evening anchored just to the west of Pumpkin Knob at the southern end of Hussey Sound. Not sure how the Peaks Is. lobstermen felt about finding her on top of their pots early this am. Quite a sight.

I don't think Emelina has to worry about the Peaks Island lobsterman considering there arent any. Im suprised the previous poster has no idea what he is talking about. Left noon today from peaks island and looks like it is heading out across the atlantic

Emelina is currently at anchor off the Regency Hotel in Bar Harbor, Maine as of 26 August 2009.

Emelina has been anchored behind the Saltair Inn in Bar Harbor's Frenchman Bay for almost a week now.
No sign of Paul McCartney.

Ha ha ha... It is NOT Paul McCartney's yacht.

Emelina is docked at DeMillo's floating restaurant in Portland, ME, today.

She's in Manhattan, near the battery park ferry terminal, today. A real beauty.

She is massive..lovely vessel. I saw her in Battery Park today as well.

On Penn's Landing in Philadelphia September 18, 2009

She is still in Philadelphia at Penn's Landing on Sept. 20th.

She's back in the D.C. area....arrived last night or this morning (9/24). Currently anchored in the Washington Channel with 3 DC Police cars and 1 van parked directly adjacent to her in E. Potomac Park. The vessel appears to be flying the British Red Ensign (or perhaps Bermuda?)...

I saw her on my bike ride home from work this evening in the Washington Channel. A very nice looking yacht. The crew was all on the back deck and they had just unloaded the tender from the garage.

She's now docked on the mouth of the Miami River, behind the Epic Hotel and Residences.

This is Franklin Haney's yacht. He is a very wealthy developer is originally from TN. The yacht is named after his wife, Emeline.

The Emelina is now in Key West, anchored outside of Mallory square.

Wow. You guys really have nothing better to do than spot some guy's yacht?

I'd like to know who owns Emelina as this yacht has been following us round Croatia. First it turned up in Hvar and then on Zadar. Kind of spooky so like to ask the owner why they're chasing us.

and no...I have nothing better to do this summer as I'm just sailing round the Mediterranean till I get bored

The comment above that the Emilina may belong to Paul McCartney is very funny. The owner is a member of my family, is an Irish American, and bears a very strong resemblance to Paul McCartney, which has been a thing we have kidded him about for decades. ... It belongs to Franklin Haney indeed and is named after his wife Emmy (Emiline).

This is very funny to read almost a year after the last post! I have just run past this beauty once again in Manhattan at Chelsea Piers. The wealth astounded me and being a poor little Aussie traveller I immediately got home to google it in the hope of star spotting. Beutiful yacht, beautiful name... A girl can dream!

It is a lovely yacht and it is here in my hometown of Gaspe, Quebec, Canada tonight. I love the name.

EMILINA is back in sw dc, nice yacht, just saw her while dining at Jenny's:) Looks like the couple charters the boat now for just 196,000 Euro per week. After I pay off my condo, ill sell it, then live it up for a week. I hope meals are included:)