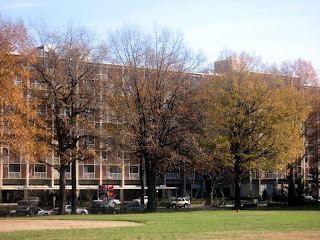 In last week's Washington Business Journal (thanks for the tip, reader DavidSW), there was a brief article (subscribers only) about the troubles that developer Monument Realty has experienced with liens at Potomac Place Tower, a condo conversion project at 4th & G Street. From the article:

At the end of May, at least three contractors filed suit in D.C. Superior Court to enforce more than $1.3 million in mechanic’s liens the contractors filed against the last of three condominium buildings Monument is building at [Potomac Place] near the Southwest waterfront.

Back in December, Southwest...TLQTC first reported on a lien placed on the condo building by general contractor Dietze Construction. (Above is a photo of Potomac Place Tower taken in December 2008)
Posted by SWill at 8:50 PM

I wondered what the problem was with that building... half of it has been "under rennovation" for at least a year.

Thank you for posting this.

Would love anymore information you have regarding Potomac Place Tower. I am one of the unfortunate "buyers" that has a contract on a condo and settlement is held up until apparently the new financing and Lehman Bros come to a price agreement. This has been going on for close to a year now and Monument (the developer) has been as unsupportive to their future residents as possible in my opinion. Thanks for being the only site with any updates regarding this project.