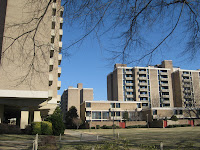 - DC Metrocentric: The ArchiCritic at DC Metrocentric gives a mostly positive review of Tiber Island, which was constructed back in the 1960s as a result of urban renewal in Southwest. This was the architect’s first time in Southwest in the four years he has lived in DC. I can relate – I first moved to DC in 1998 and had never been to the residential portion of Southwest until four years later, when I took a detour through M Street because there was construction activity on the SE-SW freeway one day and I needed to connect to I-295. I considered buying a unit at Tiber Island when I was house hunting back in early 2004. It was the first building I looked at and one of the things that turned me off – besides the size of the unit, was the windswept plaza that separated the buildings. It just looked cold and uninviting to me. Above is a photo of Tiber Island, taken in February 2009. 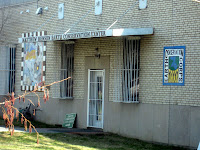 - JDLand: This Friday, the Washington Nationals will have its first ‘Green-Up’ day, where volunteers will help clean up areas along the Anacostia River, which will be based at the Earth Conservation Corps building on Half Street. Cleanups will also occur across the river at Poplar Point in SE. If you’re interested in volunteering, contact Lisa Pagano from the Nationals (lisa.pagano@nationals.com). Above is a photo of the Earth Conservation Corps HQ building, taken in December 2008.
Posted by SWill at 10:21 PM

Not to be confused with Carrollsburg across 4th Street, which looks like Tiber Island but has a warm and inviting grassy courtyard with a fountain...