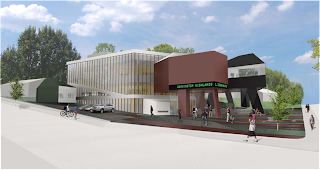 With the news that architect David Adjaye's firm was chosen to design the National Museum of African American History and Culture on the National Mall, we thought we would focus on Adjaye's other work in DC - namely the new Washington Highlands branch public library he is designing on Atlantic Street in Bellevue (Southwest...TLQTC reported on this story back in October). On March 31st, there was a community meeting where a slide show presentation showed some of Adjaye's initial designs for the new space. The new library will be three stories tall, contain approximately 20,000 square feet of space, and will aim for LEED-Silver certification. Enhancements at the new library include an outdoor amphitheatre, outdoor space for children's games like hopscotch and jump rope, a garden, meeting rooms, study rooms, additional computers, and separate space for children, teens, and adults. According to the Washington Highlands Neighborhood Library Project website, the design process should be complete by Summer 2009, with construction taking 18-20 months. By Spring 2011, the new library should be open. An interim library will be open for the community around the corner from the current site while the new one is built. (Above is a rendering of the new library shown from South Capitol Terrace, from the March 31st presentation)
Posted by SWill at 9:10 PM

please tell me they're not really planning for a mini parking lot right in front of the building like in that sketch. yuck.