They Paved Over Paradise!

Just as developer Vornado told Southwest...TLQTC back in February, Bernstein's Reliable Liquors, along with the other businesses at 1101 South Capitol Street (except for the 7-Eleven and the Taco Bell/KFC site) have been demolished and replaced by a surface parking lot in time for Opening Day at Nationals Park, which is tomorrow. The parking lot is temporary - once the economy improves, the lot will be developed into a mixed-use project. Below is a progression of photos showing the transformation of Bernstein's from a three-story building to a parking lot. 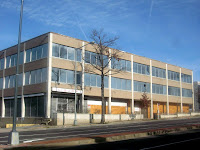 This photo was taken in December 2008. The liquor store was already closed and the ground floor of the building was boarded up. 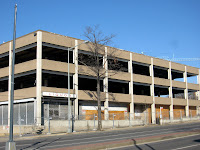 This photo was taken in February 2009. By this time, the building was gutted and fencing was placed around the building.