South by Southwest Coming to DC 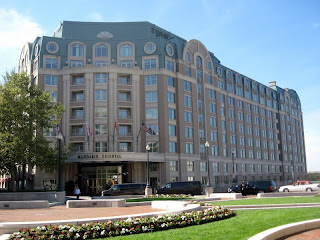 I'm not referring to the festival in Austin, but South by Southwest is the name of the Mandarin Oriental Hotel restaurant that will replace Cafe MoZU this summer, according to the Going Out Gurus at The Washington Post. A description of the Eastern Shore-inspired menu is described in the Post article:

The naming of the restaurant is an attempt to relate the hotel more to its neighborhood, since the restaurant has windows with views of the Southwest Waterfront and Tidal Basin.
Above is a photo of the Mandarin Oriental Hotel taken in October 2008.
Posted by SWill at 10:12 PM