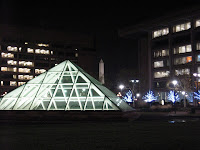 In the Spring 2009 issue of OnSite Magazine (subscribers only) from the Washington Business Journal, there's an article about eyesore buildings around the city, including the FBI headquarters and the new convention center. Inevitably, L'Enfant Plaza was profiled, a 1960's-era concrete mixed-use complex that sits on top of the L'Enfant Plaza Metro station. Currently, L'Enfant Plaza consists of three office buildings, the L'Enfant Plaza Hotel and an underground retail promenade. JBG, one of the largest developers in the region, owns two of the office buildings totaling 631,000 SF, the 370-key hotel, and the retail promenade totaling 179,000 SF. (Above is a photo of the central courtyard and the north & west buildings taken in December 2008 - JBG owns the north building). JBG has plans to expand L'Enfant Plaza with two office buildings, an extended-stay hotel on the north end of the property, and a 202-unit apartment building on the south end of the site. In the article, JBG publicist Julie Chase mentioned the following about the goal of the expansion:

“The goal is to make [L’Enfant Plaza] far more pedestrian-friendly and bridge the up-and-coming vitality of the Southwest waterfront,” Chase says.

The article also states that Chase predicts that L'Enfant Plaza will emerge as a "second ring" to the clubs and restaurants along the Southwest Waterfront and will act as a buffer between the National Mall and the Maine Avenue corridor. The folks over at JBG were kind enough to send Southwest...TLQTC some renderings of the new office and hotel components (see below). SmithGroup has designed the new buildings and has also designed Constitution Center. 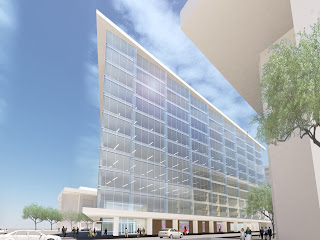 Here's a rendering of the southern facade of one of the new office buildings, which will be located in the central courtyard and will have ground-floor retail. 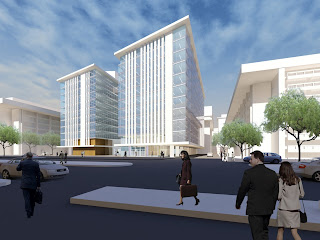 Here is a view of the two new office buildings as seen from across 10th Street, which will total about 500,000 SF. The retail component will contain about 25,000 SF. 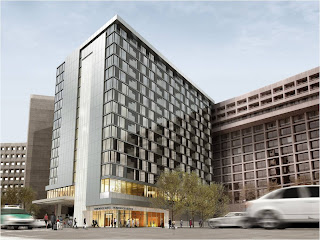 On the northeast corner of the complex, a new 234-key extended-stay hotel will be built along D Street.
Ms. Chase at JBG said in the OnSite Magazine article that construction would begin next year and will deliver in phases in 2011 & 2015.
Posted by SWill at 11:20 PM

(1) I recently walked through the "underground" promenade at L'Enfant Plaza and noticed that all the retail establishments from the Metro exit to just before reaching the area under the skylight have closed and moved, or are moving to previoulsy vacant spaces in the remaining parts of the promenade. Is this part of the Plaza expansion project discussed above? (2) Also, I like the idea and design of the extended stay hotel on D Street, in isolation, particularly the fact that it fronts on the street, but is it really going to block and clash with the L'Enfant Plaza Hotel/Office building as indicated in the rendering? That seems to be just making a bad situation worse. (3) Ditto for the 2 infill office buildings in the outdoor plaza bordering the new "10th Street." I support of having groundfloor retail in that vicinity, but why not make use of the extensive exsiting gound floor space abutting wide sidewalks surrounding the outdoor plaza, i.e., the space where Riggs Bank used to be, etc? The outdoor plaza per se is a desirable feature, and if enlivened would be one of the highlights of the project, as well as adding versatility of use - picture festivals, outdoor concerts and other similar events. Any light you could shed on these questions would be appreciated.

Anonymous: You must be reading my mind, because I'm in the process of doing some research on this very topic! I'll have a post about it, hopefully by next week, but what I know so far is JBG is spending $40.1 million (not an insignificant sum of money) to renovate the retail promenade.