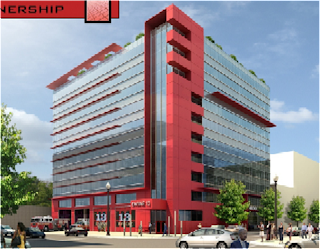 Earlier this evening, DMPED held a forum where the three development teams vying for Squares 494 and 495 had the opportunity to present their project proposals to the community. DMPED will post the slide show presentations from the three teams on their website tomorrow, and then I'll have a more in-depth post about the proposals. Meanwhile, I thought I'd whet your appetite with a rendering of one of the proposals for the new Engine 13, courtesy of E Street Development. The above rendering is a view of a new two-story firehouse, with an office building on top, at the corner of 4th & E Street (the vacant parcel alongside the SE-SW Freeway).
Update #1: The presentations have been uploaded to the DMPED website. You can see the presentations for E Street Development, 494 Partners, and Trammell/CSG/MVH. I'll give more details on each proposal by this weekend.
Update #2: Following is a description of each of the proposals, along with some renderings. For reference purposes, parcel A is the site of the current Engine 13, which is located at the corner of 6th & E Street. Parcel B is the parking lot at the corner of 4th & E Street. All three proposals plan to move Engine 13 to Parcel B into a 22,000 SF space and all include some office space and ground-level retail. The similarities end there...
Proposal 1 (E Street Development) 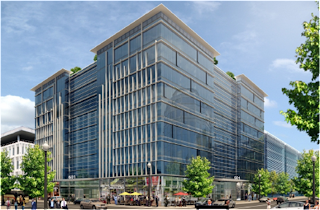 E Street Development is a combination of Potomac Investment Properties, CityPartners, and Adams Investment Group. Their architect is Beyer, Blinder, Belle. E Street Development has partnered with the D.C. Central Kitchen and Kid Power Inc. to provide community-oriented space in their development. Both parcels will be designated LEED Silver and will have green roofs. In this proposal, parcel A would become a 307,000 SF nine-story office building with ground floor retail space along E Street. The D.C. Central Kitchen wants to create a retail outlet on the first floor of the building, in the form of a restaurant where their trained cooking staff can prepare affordable nutritious meals. Retailers that the development team will target include a coffee shop and daycare center. Parcel B will be a 191,000 SF, 10-story office building, with a new Engine 13 firehouse on the ground floor. The firehouse will be facing 4th Street, while the office building's lobby will be oriented towards E Street. There will be 3,000 SF of community space on the second floor of the building, where Kid Power Inc. will have space to implement their programs. Locally, Kid Power Inc. works with 50 kids at Amidon-Bowen Elementary and Jefferson Middle School, but currently don't have enough space to do after school programs. (The above rendering is parcel A, viewed from the corner of 6th & E Street, from the DMPED website)
Proposal 2 (494 Partners)

494 Partners is made up of a partnership between JLH Partners, Chapman Development, and CDC Companies. Their architect is Compu.tecture, and as in proposal 1, both parcels will have green roofs. This proposal would put a 208-key extended-stay hotel on parcel A. The hotel would be 9-stories tall, shaped like an L, and the main lobby would face E Street. In the hollow area of the "L", there would be an 11,000 SF all-weather atrium, which would be open to the public 365 days a year. The atrium would be oriented towards historic St. Dominic Church and contain green space. There would be 6,000 SF of ground-level retail space, targeting a restaurant, coffee shop, and drug store. During the 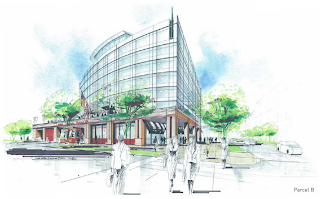 presentation, the development team mentioned that they have spoken with the proprietors of La Tomate (a restaurant along Connecticut Avenue, NW in Dupont Circle) about opening a second restaurant at their site. Parcel B will have a 103,000 SF eight-story office building with a firehouse on the first two floors, and 3,450 SF of retail space on floors 1-2. Compu.tecture designed the upper floors of the office building to curve along 4th Street. The firehouse entrance would be on 4th Street and the office building lobby would be on E Street. (The first rendering is parcel A, viewed from the corner of 6th & E Street; the second rendering is parcel B, viewed from the corner of 4th & E Street, from the DMPED website)
Proposal 3 (Trammell/CSG/MVH) 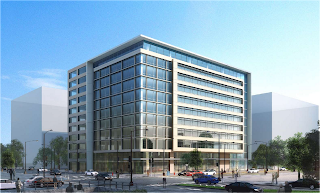 The third team is made up of Trammell Crow, CSG Urban Partners, and Michele Hagans. Their architect is Gensler, the same designer who did Trammell Crow's Patriots Plaza development catty corner to parcel B, which is currently under construction. This proposal has the most office space planned out of the three development teams, while both buildings would have either green or white roofs and would be LEED Silver. Parcel A would have a 306,000 SF 11-story office building with nearly 14,000 SF of ground level retail along E Street, 6th Street, and School Street. About 2,200 SF of community space would be provided on School 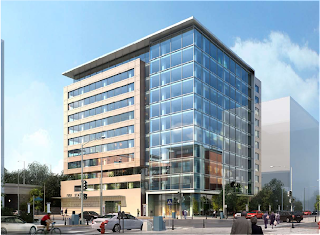 Street, however, a community partner has not been identified yet. The main lobby would be on E Street. Parcel B would be a 190,000 SF 11-story office building with Engine 13 on the first two floors. The firehouse entrance would be on 4th Street and the main lobby for the office building would be at the corner of 4th & E Street. Currently, there are four levels of below-grade parking planned, but since Trammell Crow has Patriots Plaza nearby, they may share parking to try and reduce construction costs. (The first rendering is parcel A, viewed from the corner of 6th & E Street; the second rendering is parcel B, viewed from the corner of 4th & E Street, from the DMPED website)
After the presentations, there was a question/answer session, where members of the community were able to ask the development teams questions about their proposals. Not many community members attended the forum, so most of the questions came from ANC 6D commissioners. I asked the development teams whether the large amount of vacant office space in SW would require them to secure a major tenant before starting construction on the office portions of their proposals. All three teams committed to start construction on parcel B first with or without a lead tenant, since opening a new firehouse is a priority. It wasn't clear from their answers whether there would be any delays in building on parcel A. Even if you weren't able to make it to the forum, DMPED wants your input, so questions and commentary about the proposals can be submitted to dcbiz@dc.gov until Tuesday, March 3rd. The questions and the developer teams' responses will be posted on DMPED's website by the end of next week. In addition, please vote on which proposal you like best by participating in our poll (see the left sidebar). While the Deputy Mayor's office will make the final decision on which team will win the bid, I will forward the results of the poll to the project director at DMPED. The poll will be open until Friday, March 6th.
Posted by SWill at 10:12 PM

that thing on the front is too big, too red, and too ugly.