In this week's WBJ (subscribers only), there's an article which explores the theory that theaters help boost business in their surrounding neighborhoods, including the increased patronage at restaurants with Arena Stage's temporary presence in Crystal City. However, in these tough economic times, the article states that theater companies are trying to adapt in different ways. Here's a snippet from the article which deals with Arena Stage:

When Arena Stage noticed its sales slipping, the theater unveiled a new $25 ticket strategy and sold [$20,000] worth of discounted tickets in 24 hours. It will keep some seats at that price permanently this year...Arena Stage’s new $125 million three-theater campus is set to open in 2010. Artistic Director Molly Smith said she does not have concerns about opening a facility in a sluggish economy, partly because the new space does not include more seats to fill. Arena’s former capacity is redistributed over the three new theaters.

Below are updated photos of the new Arena Stage under construction taken this past Sunday from 6th Street (left) and Maine Avenue (right). Check out a prior post to see progress photos from October and November. 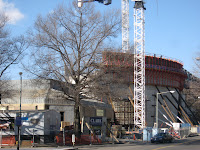 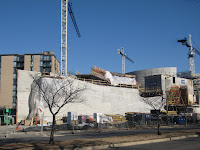